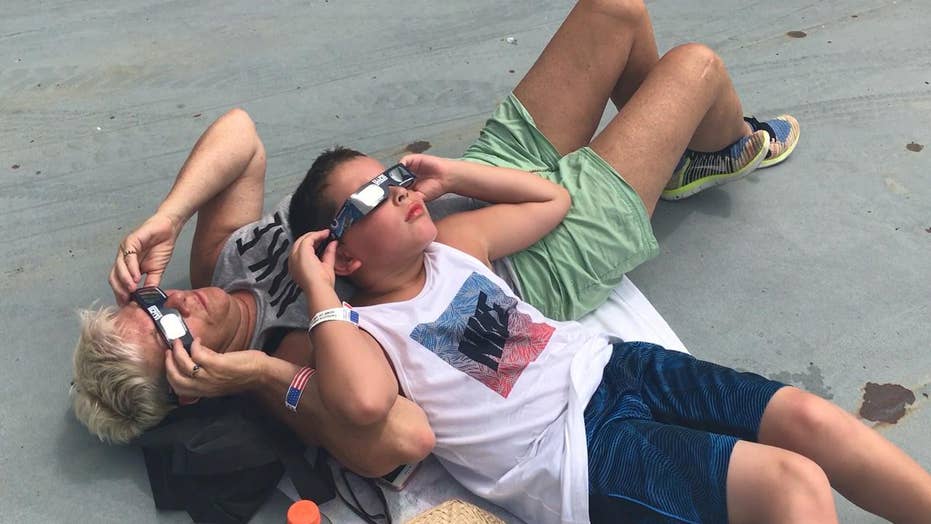 Thousands flock to Charleston to see last leg of the eclipse

Millions gazed at the eclipse along the path of totality with it ending its coast-to-coast journey in Charleston, SC. Nearly 3,000 visitors from all over the country viewed the celestial event from the deck of USS Yorktown (Fighting Lady), the famous World War II battleship.

“It always seems to be in other parts of the world,” New Hampshire software engineer Martin Winkler told Fox News aboard “Fighting Lady”. “I planned it about 7 months ago. I heard this was happening. It’s once in a lifetime experience. It was on my bucket list of things to do.”

“We drove four and a half hours,” Brad Thomas said, describing his travel from Jacksonville, Florida with his wife and son.

Many families set up lawn chairs across around the upper level of the battleship. Others listened to experts from NASA, rode in a simulator or viewed memorabilia below the deck.

In the morning scattered rain, thunder, lightning and dark clouds threatened to block the afternoon view of the solar eclipse. Around 2:40 p.m. there was a sea of faces wearing solar glasses. Loud gasps and people shouting,“it’s beginning” could be heared all around the ship. Once the moon reached totality, it grew very dark and thunder and lightning began. Many cheered and clapped.

“It was amazing, totally worth the trip.” Terry Eggenberger, another Floridian, says she and her husband came to Charleston for her son. “We brought our 13-year-old boy. He’s in advance science classes. We thought it would be great for him to see it from this location.”

The next predicted eclipse will travel across the country in 2024.