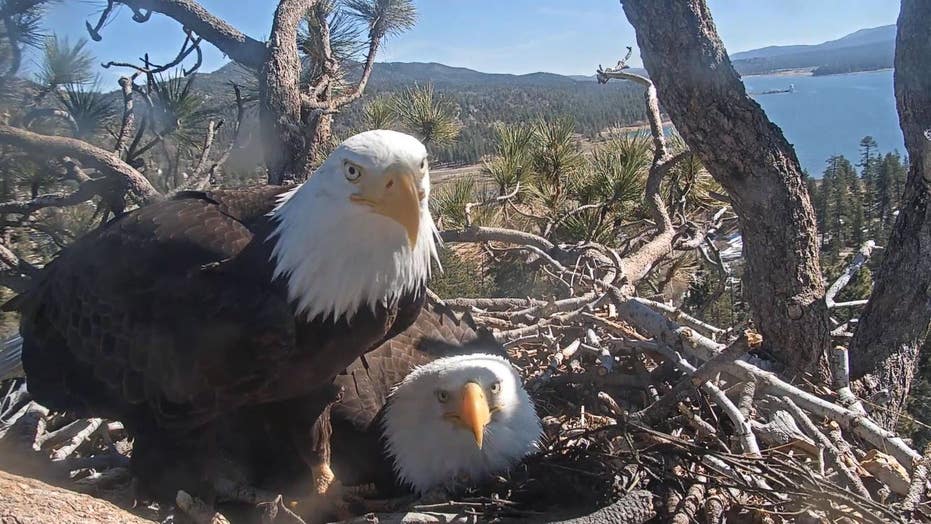 The U.S. Forest Service on Friday said time is running out for the eggs of two California bald eagles to hatch.

The eagles are on day 44 and day 41 of watching over the eggs laid by the female Jackie in the San Bernardino National Forest. The eggs typically hatch between 35-38 days.

"It’s hard to say this, but the odds of our Big Bear bald eagle nest’s eggs will hatch this year are diminishing each day," the National Forest said on Facebook. "The window of successful hatching is closing."

The agency said they haven’t seen a crack in the egg, which should be there when the chick pokes a hole in the shell.

Jackie and Shadow look towards the camera on Thursday morning. (Friends of Big Bear Valley)

The reason the eggs haven't hatched could be the result of cold temperatures, infertile eggs, the deaths of the embryos during incubation or the inability of the chicks to break out of their shells, the agency said,

Both eagles have been intensively monitored and live-streamed by Friends of Big Bear Valley during the process, which routinely captures Jackie sitting in the nest, while her mate Shadow goes out to hunt for food.

A Livestream taken of the birds on Sunday night showed Jackie still patiently resting on her eggs, waiting for them to hatch.

A Livestream taken of the birds on Sunday night showed Jackie still patiently resting on her eggs. (Friends of Big Bear Valley )

SWARM OF NEARLY 40,000 BEES IN CALIFORNIA SEND 5 TO HOSPITAL

Jackie and Shadow will likely incubate the eggs for another 10 days because ravens could prey on them if left alone.

It's also possible the bald eagles will eat the eggs if they break in the nest, according to the agency.

"Sometimes Mother Nature can be harsh and disappoint us with our human hopes," the National Forest said. "Getting a glimpse into the daily lives of this beautiful bald eagle pair has been a real treat. Bald eagles have a very strong fidelity to their nest sites."

The Forest Service said because of this reason the majestic creatures won't give up and are likely to be nesting in the same place next season.