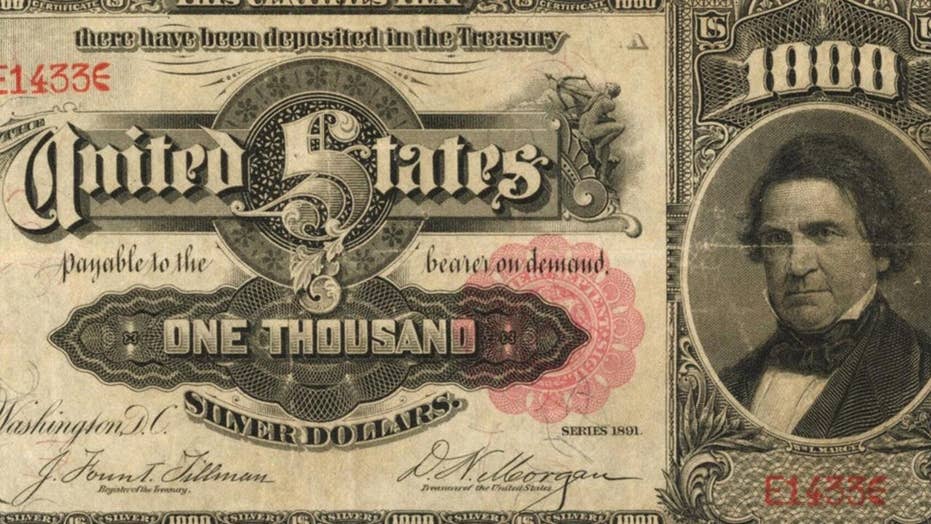 Extremely rare 'unicorn of US paper money' sells for $1.9 million

An extremely rare U.S. currency note from the late 19th century has sold for $1.92 million.

An extremely rare U.S. currency note from the late 19th century has sold for $1.92 million.

The 1891 $1,000 Silver Certificate is the only bill of its kind believed to exist in private hands, according to auction house Stack’s Bowers Galleries. Known as the Marcy note, the bill features the portrait of former New York Gov. William L. Marcy, who served as a senator and as secretary of war under President James Knox Polk.

Stack’s Bowers Galleries explains that the Marcy note is sometimes considered the “unicorn” of U.S. money thanks to its unique design. The bill, which had an estimated pre-sale value of $2 million to $3 million, was offered at auction for the first time.

"You can’t own a rarer piece of American paper money,” said Brian Kendrella, president of Stack’s Bowers Galleries, in a statement.

The back of the note. (Stack’s Bowers Galleries)

The note, which was part of the Joel R. Anderson Collection, was auctioned at the Whitman Spring Expo in Baltimore.

Another extremely rare $1,000 bill described as the “Holy Grail of paper money” was recently sold at auction for just over $2 million.

'HOLY GRAIL OF PAPER MONEY' SELLS AT AUCTION FOR $2M

The 1890 Treasury Note is dubbed the “Grand Watermelon” on account of the large green zeros on the back of the bill. Major General George Meade, the commander of Union forces at the Battle of Gettysburg, is shown on the bill’s face.

Earlier this year an extremely rare 1943 Lincoln penny that a Massachusetts teen found in his change from lunch money sold for $204,000.