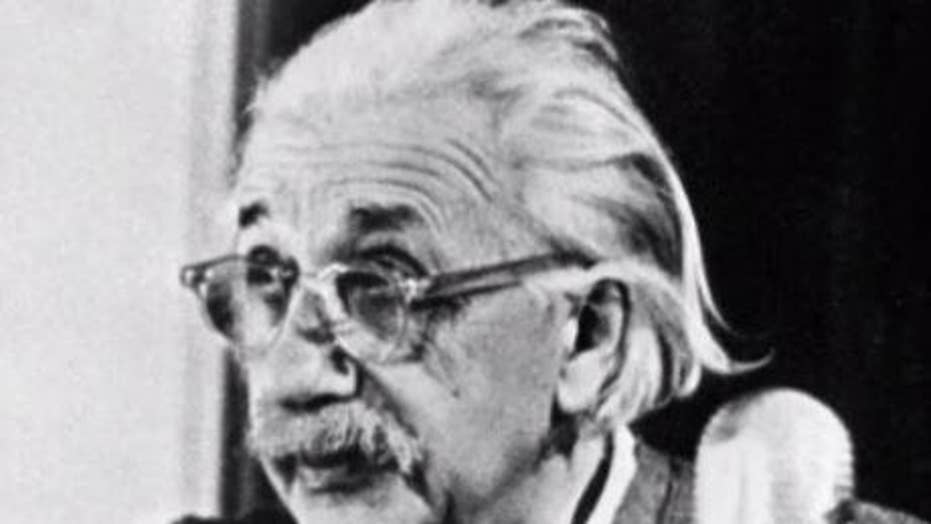 The 33-minute recording reveals that Einstein thought it was a good thing that the former U.S.S.R. obtained an atomic bomb, and that he did not think FDR would have dropped atomic bombs in Japan.

An incredibly rare audio recording of arguably the world's most famous theoretical physicist, Albert Einstein, is set to go up for auction tomorrow, May 4.

Perhaps even more startling are the topics on the recording – Einstein's love of music, the differences between FDR and Harry Truman and his thoughts on the atomic bomb.

On the 33-minute recording, Einstein, in his thick German accent, can be heard saying that it is a good thing the former U.S.S.R. obtained an atomic bomb. "It is better for world welfare that the Russians have it, too," Einstein said, adding that he knew the former head of the Soviet atomic program. "I gave no secrets to him," he humorously quipped.

Einstein also said that he regretted his famous letter to former President Franklin Delano Roosevelt about the possible development of an atomic bomb. "I repent it very much... I believe it was a great misfortune," while downplaying any kind of notion he helped develop the bomb.

The world-renowned scientist believed that FDR and former President Harry Truman were very different men, going say far as to say that FDR would not have dropped atomic bombs had he been alive. "[FDR] ...would not have used it had he lived... this I am convinced."

In August 1945, Truman dropped two atomic bombs towards the end of World War II, one over Hiroshima and the other over Nagasaki.

According to 2007 research from UCLA, it's estimated that 150,000 people were killed as a result of the Hiroshima bomb and 75,000 are believed to have died from the bomb that was dropped over Nagasaki, though the results were deemed "conservative," citing the "destruction and overwhelming chaos."

Einstein also discussed his acquaintance with various European and Soviet scientists, as well as his love of music, including his preference for classical music such as Schubert, Beethoven and Brahams.

"I did very much like Wagner... In my youth, I had heard nothing better than Ionescu's Violin Concerto," Einstein can be heard saying.

RARE EINSTEIN LETTERS, REVEALING HIS ESCAPE FROM THE NAZIS, UP FOR AUCTION

Heritage Auctions, the auction house selling the rare find, said it had "[p]ersonally ... never even heard recordings of his voice," despite the fact that Einstein was known throughout the globe during his lifetime. A three-minute preview of the clip can be heard on the auction house's website.

Heritage added that the recording is from 1951 when Einstein "sat down for a meal with Jack and Frances Rosenburg at the Institute for Advanced Studies in Princeton."

"Their 1951 casual conversation was recorded on long-playing discs," Heritage wrote in a description on its website. "It was subsequently transferred to magnetic tape and given to the present consignor close to thirty years ago."

It's unclear where the original discs are, but when the conversation was transferred, music was spliced in as well.

"The initial volume level is fairly low, but reaches a normal level after a brief period. There is some background noise and surface 'scratches' and popping," the description continues. "Einstein, as expected, speaks in a thick German accent. The three-way conversation is punctuated with joking and laughter, indicative of Einstein's sense of humor."

Bidding for the tape starts at $3,500 the auction house said, adding that the successful bidder will also receive a CD containing the recording.

In recent months, Einstein's letters have garnered significant interest at auction. In March, along with a June 12, 1939 letter detailing his thoughts on the power of "Jewish resistance," two other letters went up for auction, including one which he detailed his thoughts on "Hitler insanity."

A letter in which he discussed his Jewish faith as well as "man's eternal search for meaning" sold for a record-breaking $2.89 million in December 2018.

Einstein's note on the theory of happiness sold to at a Jerusalem auction for $1.56 million in October 2017. The buyer's identity was not revealed.