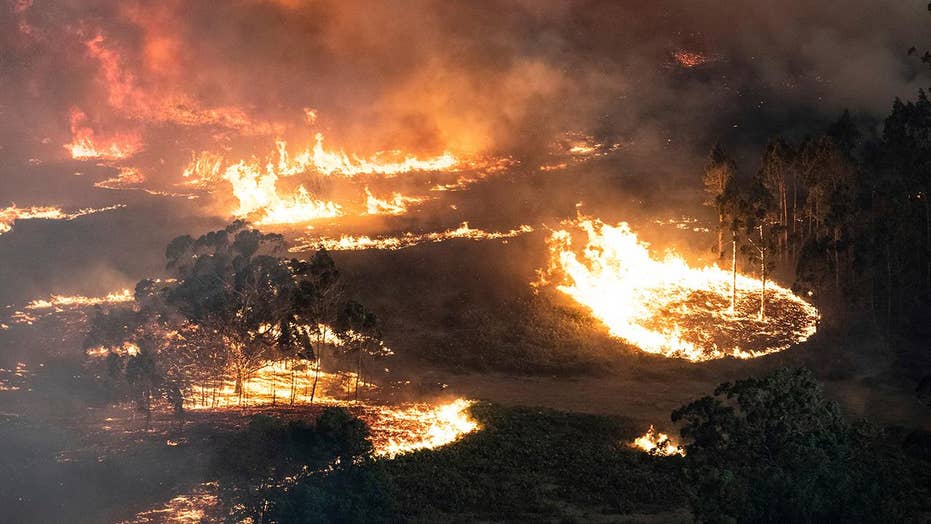 Despite around the clock containment efforts, many fires are still burning out of control; Jeff Paul reports from Yatte Yattah, Australia.

As the Australian bushfires rage on, the smoke from the devastation can be seen from space — and the effects felt across the globe.

The National Oceanic and Atmospheric Administration has posted a gif to Twitter detailing just how widespread the smoke is, covering not only Australia, but parts of Argentina, Chile and Uruguay.

Earlier this week, NASA's Terra satellite captured the extent of damage from the wildfires that ravaged Australia's Kangaroo Island, noting that one-third of the island — 155,000 hectares or 383,013 acres — shows burn scars, as well as areas that are still on fire.

Kangaroo Island, which lies off the mainland of South Australia, contains nature reserves that are home to native wildlife and various endangered bird species. University of Sydney professor Chris Dickman told CBS News earlier this week he believes 1 billion animals have died as a result of the bushfires, which have shown little signs of abating.

U.S. officials said Tuesday they're planning to send at least another 100 firefighters to Australia to join 159 already in the country battling wildfires that have killed 25 people and destroyed 2,000 homes.

A firefighters backs away from the flames after lighting a controlled burn near Tomerong, Australia, Wednesday, Jan. 8, 2020, in an effort to contain a larger fire nearby.  (AP Photo/Rick Rycroft)

The National Interagency Fire Center in Boise, Idaho, said that 90 firefighters including on-the-ground hand crews left in recent days to fight fires that have scorched an area twice the size of the U.S. state of Maryland.

Another 100 American firefighters are expected to fly to Australia next week, said center spokeswoman Carrie Bilbao. It's the largest ever deployment of U.S. firefighters abroad, she said.

The Australian Fire and Emergency Service Authorities Council requested the firefighters as part of a reciprocal deal that sent 138 Australians to fight U.S. wildfires in 2018. The U.S. has similar agreements with Canada, Mexico and New Zealand. The last time the U.S. sent firefighters to Australia was in 2010.

Australia is getting some relief, however minor, in the form of thunderstorms and showers that are bringing much-needed rain to the country's drought-parched east coast on Wednesday. However, there were also concerns that the lightning could result in more fires prior to the return of hot and windy conditions.

“Unfortunately with lightning strikes, it's not always the next day they pop up,” Fitzsimmons told the Australian Broadcasting Corp. “They can smolder around in trees and in root systems for a couple of days and pop up under drier, hotter conditions, so we are very mindful of that as we head into Friday.”

Officials announced Monday that nearly 200 people have been charged with fire-related offenses since the catastrophic wildfire season began.