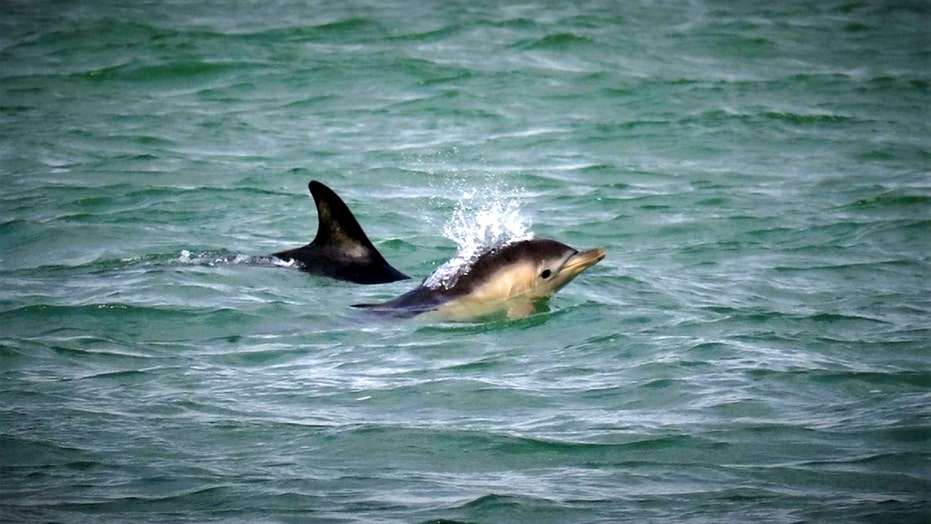 A dolphin calf that is believed to be just one day old was spotted swimming in the waters off the British coast, near Torquay.

The picture was taken by 45-year-old Rob Hughes, who takes tourists on sightseeing trips around the south coast, SWNS reports. While on the trip around Labrador Bay, Hughes spotted a dolphin pod protecting what looked to be a newborn.

"We were out on a trip on Thursday morning and we were observing this pod and saw they had a very young calf with them," Hughes said in comments obtained by SWNS. "It couldn't be more than 24 hours old, you can tell because of the size and it was still a bit wrinkly. We [had] been following the pod the day before and they didn't have the calf with them then so we knew it was a newborn."

HILARIOUS PICS SHOW DEER SITTING ALONGSIDE COWS, CONVINCED IT'S ONE OF THEM

Hughes added that he regularly sees the same dolphins in the same spots, but was surprised to see the calf.

"You can identify individual dolphins after a while by their scars and marks, because we see them so often," Hughes said. "We couldn't tell which one was the mother because there was a group of three or four dolphins sheltering the calf."

The common bottlenose dolphin has a gestation period of up to 12 months and they generally nurse for more than a year, according to the National Oceanic and Atmospheric Administration.