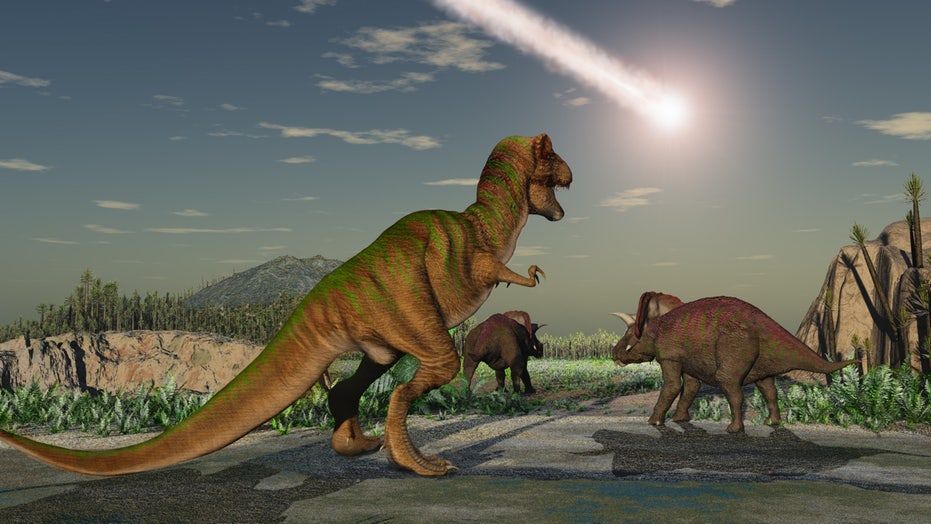 Prior to their asteroid-linked extinction, dinosaurs were already struggling to survive due to a sharp increase in mercury levels caused by a massive volcano eruption, according to a new study.

The researchers looked at fossilized marine mollusk shells from across the globe. The researchers discovered "what appears to be a global signal of both abrupt ocean warming and distinctly elevated mercury concentrations" caused by the mass eruption of the Deccan Traps in India, according to a statement accompanying the study.

"For the first time, we can provide insights into the distinct climatic and environmental impacts of Deccan Traps volcanism by analyzing a single material," said Kyle Meyer, lead author of the new study, in a statement. "It was incredibly surprising to see that the exact same samples where marine temperatures showed an abrupt warming signal also exhibited the highest mercury concentrations, and that these concentrations were of similar magnitude to a site of significant modern industrial mercury contamination."

Prior to their asteroid-linked extinction, dinosaurs were already struggling to survive due to a sharp increase in mercury levels caused by a massive volcano eruption, according to a new study. (Esteban De Armas/Shutterstock)

The study has been published in the scientific journal Nature Communications.

The level of mercury in the ancient shells was comparable to the freshwater clamshells that the researchers collected from Virginia's South River contaminated site. The study's co-author, Sierra Petersen, said the area has a fishing ban because of the high levels of mercury.

"Mercury anomalies had been documented in sediments but never before in shells," Petersen added. "Having the ability to reconstruct both climate and a volcanism indicator in the exact same materials helps us circumvent lots of problems related to relative dating. So, one of the big firsts in this study is the technical proof of concept."

Mercury is a highly toxic metal that not only results in significant health issues in humans, but fish and wildlife as well. Volcanic eruptions are the largest producer of naturally occurring mercury. The fossilized shells, which contain mercury, give new credence to the idea that mercury poisoning may have negatively impacted the dinosaurs.

The new study sheds light on both the timing and scale of the Deccan Traps explosion, as well as a direct linkage to how the climate responded--"an important first," according to the authors.

The mass eruption of the Deccan Traps likely happened several thousand years prior to the asteroid that left the Chicxulub crater in the Yucatán Peninsula in Mexico and "lasted, on and off, for nearly a million years." These eruptions, which occurred 66 million years ago, are believed to have formed much of western India.

Researchers continue to learn more about the time period surrounding the dinosaur extinction, including about the asteroid itself. According to a study published in October, the asteroid, which hit Earth and wiped out nearly 75 percent of all species on the planet, may have acidified Earth's oceans.

A separate study, published in January, put forth a theory that the impact from the space rock also caused a worldwide tsunami that reached more than 5,000 feet in the air.