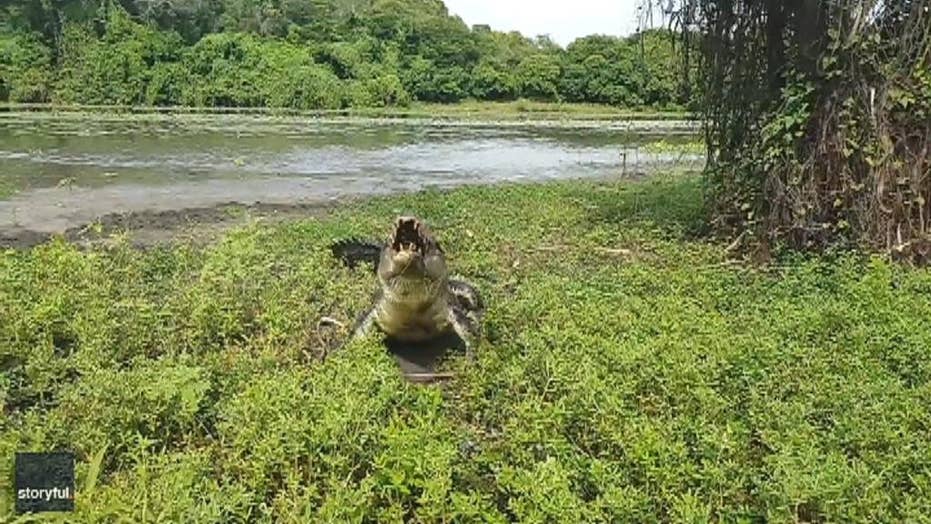 A massive crocodile was spotted in a creek in Ohio while young children were playing in the water.

A group of children with a church group was playing in the Bantas Fork Creek in Preble County Wednesday evening with a group leader when a shadowy figure was spotted just below the water’s surface, according to local news station WLWT-5.

“I saw a black shadow and I could see its tail moving,” one of the children who was playing in the creek, River Lowe, 10, said.

Other adults supervising the 16 children were standing on a bridge over the creek when they spotted the 7.5-foot-long crocodile. They yelled for the kids to get out of the water and accompany them on the bridge. State authorities were notified.

An official with the Ohio Department of Natural Resources later arrived at the scene and shot the animal, which did not have a microchip or tracking implant, according to the Cincinnati Enquirer.

The crocodile, which weighed more than 170 pounds, was taken to the Ohio Department of Agriculture for examination, according to the newspaper.

The reptile was likely someone’s exotic pet, kept illegally in the state where crocodiles are not native.

"You know, you're heading down for a normal creek-stomping adventure, and you pray for safety," said Jim Hazelwood, a pastor with the church group, to WLWT-5. "You think a kid might slip on a rock or cut his foot on some glass. You're not thinking about crocodiles."