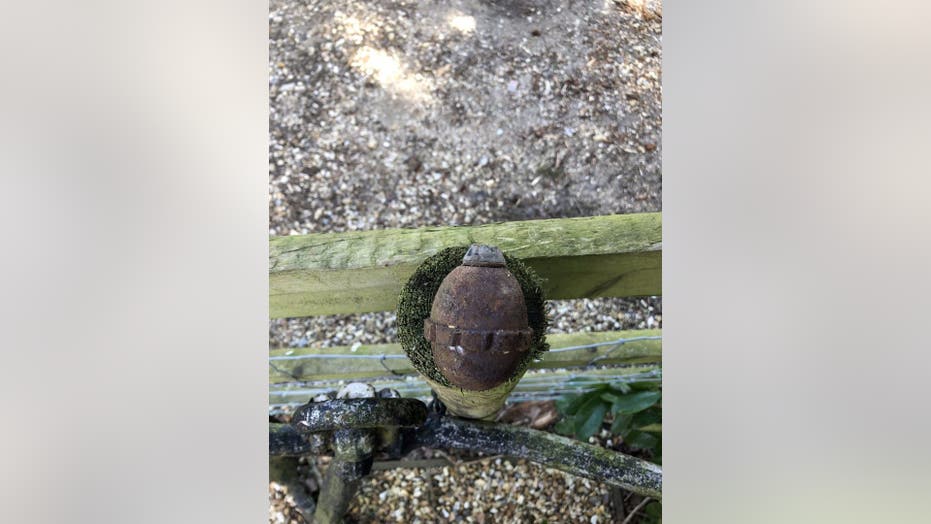 The coronavirus pandemic has resulted in many around the world being placed under "shelter-in-place" policies to slow the spread of the virus. Some people are watching television to pass the time, while others are playing video games or checking in on friends and family.

One family in England took their time-filling activities a step further: by finding a live World War I grenade.

Charlie Bubear was working on cleaning the gutters at his home in Beaulieu, Hants, England, with his family, when they spotted the more-than-100-year-old explosive, British news agency SWNS reports.

The WW1 grenade which was removed from the gutter of the Bubear family house. (Credit: SWNS)

"In the current lockdown, many of us will likely be getting around to all those cleaning and DIY jobs people love to put off," Bubear told the news agency. "But I doubt anyone would have expected to stumble across a bomb that has been quietly sitting in their roof for over a hundred years."

Initially not sure of what it was, Bubear took pictures and showed it to friends in the army. Bubear, along with wife Alice and three sons, eventually called the police, who evacuated the area.

The Royal Navy's bomb squad was contacted, safely removed the grenade and detonated it at sea in a secure manner.

The Bubear family (left to right Ned, Olliem Charlie, Alice and Jake) watch as a WW1 grenade is removed from the gutter of their house. (Credit: SWNS)

"Luckily for us the local police were great at resolving the situation so that no harm came about," Bubear added.

"It does, however, make you think twice about what you might find when giving your home a good spring clean," he quipped.

DIARY FROM WORLD WAR I DISCOVERED IN BARN, RECOUNTS BLOODY BATTLE OF THE SOMME

This is not the first World War I grenade to be found in recent memory. In February, a grenade from the Great War was discovered on a beach in the U.K. after a series of storms unearthed the object.

In February 2019, factory workers at a Hong Kong potato chip plant uncovered a German hand grenade from World War I that had not detonated.