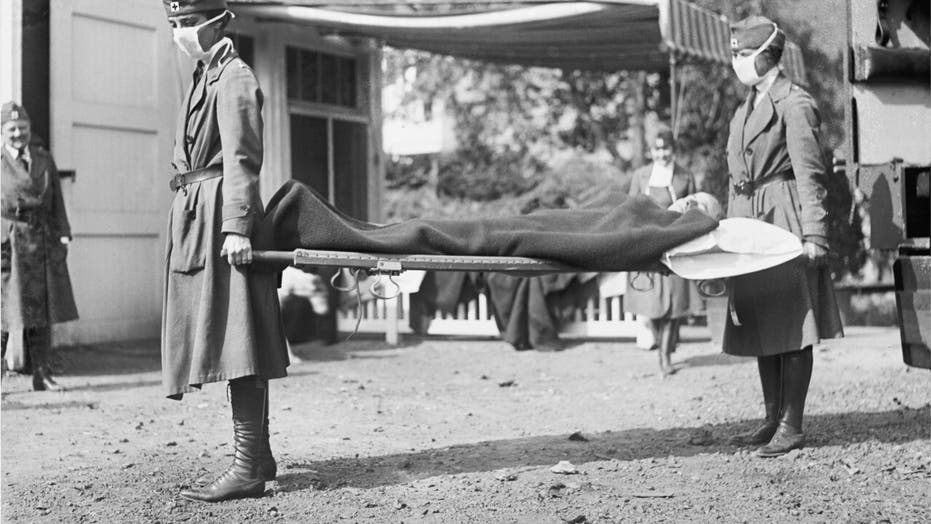 More than 100 years before the coronavirus outbreak, the world was ravaged by the Spanish flu pandemic, which infected an estimated one-third of the global population.

The epidemic that spread in 1918 and raged through 1919 was dubbed the Spanish flu because of the early press reports about the disease that emerged in Spain. A neutral country during World War I, Spain's press was not subject to wartime censorship, unlike many other nations around Europe. These press reports, as opposed to any actual link to the epidemic’s initial outbreak,  meant that the epidemic was dubbed the “Spanish Flu.”

The CDC notes that there is no universal consensus about where the pandemic, which was caused by the H1N1 virus, emerged. Some theories, however, link the start of the outbreak to the massive British World War I military base at Etaples in northern France and the base at Aldershot in southern England.

In the U.S., the Spanish flu was first identified in military personnel when 100 cases were reported at Camp Funston in Fort Riley, Kansas in Spring 1918, according to the CDC. Eventually, an estimated 500 million people, or one-third of the world’s population, would become infected.

The National WWI Museum & Memorial in Kansas City notes that whereas people around the world are engaged in “social distancing” to prevent the spread of coronavirus, the Spanish flu spread quickly with the mass movements of World War I.

“Large gatherings of people, especially soldiers and sailors, led to the rapid spread of the flu as they shipped off to war and entered other countries,” it said in a statement emailed to Fox News. “In many cases, soldiers were unaware that they had the flu and unknowingly passed the virus to other soldiers.” 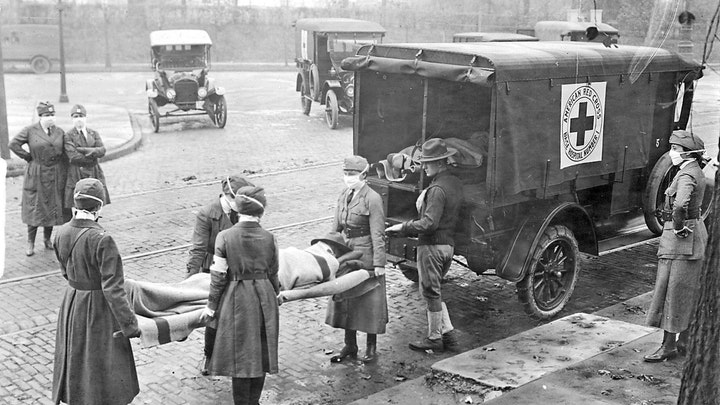 The city of St. Louis, however, was at the forefront of efforts to contain the outbreak. “Ahead of its time, the city of St. Louis closed schools, playgrounds, courtrooms and more just two days after detecting its first case in the area,” the World War I Museum told Fox News. As a result, the city was able to mitigate the spread and suffered a much lower death rate than Kansas City and other cities of similar size, it added.

WORLD WAR I BATTLECRUISER WRECK DISCOVERED NEAR THE FALKLAND ISLANDS

The pandemic came in three waves – the first beginning in March 1918 and subsiding in the summer of the following year. “The pandemic peaked in the U.S. during the second wave, in the fall of 1918,” explains the CDC. “This highly fatal second wave was responsible for most of the U.S. deaths attributed to the pandemic.”

Masked doctors and nurses treat flu patients lying on cots and in outdoor tents at a hospital camp during the influenza epidemic of 1918. (Photo by Hulton Archive/Getty Images)

Caused by an "H1N1 virus with genes of avian origin," according to the CDC, the virus left a trail of destruction in its wake with an estimated 50 million deaths worldwide, 675,000 of which occurred in the U.S.

Whereas the coronavirus can be particularly dangerous to older people, the Spanish flu also caused high mortality rates in younger demographic groups. “Mortality was high in people younger than 5 years old, 20-40 years old, and 65 years and older,” explains the CDC. “The high mortality in healthy people, including those in the 20-40 year age group, was a unique feature of this pandemic.”

To this day, researchers are still weighing the deadly impact of the Spanish Flu. “While the 1918 H1N1 virus has been synthesized and evaluated, the properties that made it so devastating are not well understood,” explains the CDC. “With no vaccine to protect against influenza infection and no antibiotics to treat secondary bacterial infections that can be associated with influenza infections, control efforts worldwide were limited to non-pharmaceutical interventions such as isolation, quarantine, good personal hygiene, use of disinfectants, and limitations of public gatherings, which were applied unevenly.”

However, doctors during the Spanish flu pandemic did treat patients with blood serum from patients who had recovered from the virus.

“Giving serum from newly recovered patients is a stone-age approach, but historically it has worked,” said Dr. Jeffrey P. Henderson, Ph.D., an associate professor of medicine and of molecular microbiology at Washington University School of Medicine in St. Louis, in a statement emailed to Fox News. “This is how we used to prevent and treat viral infections like measles, mumps, polio and influenza, but once vaccines were developed, the technique understandably fell out of favor and many people forgot about it."

The technique is now being applied to the battle against coronavirus. New York State, for example, says that it will fight the coronavirus outbreak by using the blood plasma of recovered patients.