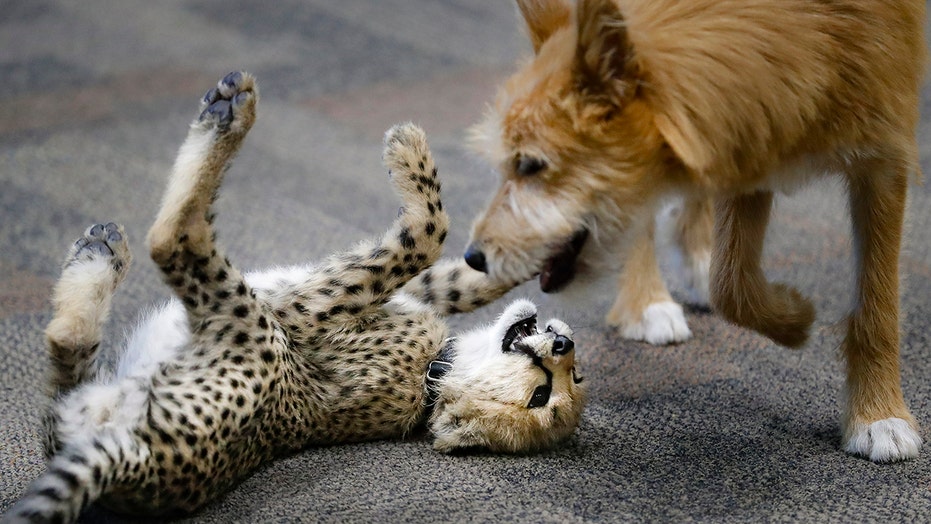 The sole-surviving baby cheetah of her mother’s litter has been paired with a rescue puppy at the Cincinnati Zoo, and video showed the playmates becoming fast friends.

Kris, a 3-month-old cub, and Remus, a rescue puppy, were put together as part of a zoo program that pairs solo cheetahs with dogs, Cincinnati Zoo lead trainer Linda Castaneda told The AP. Video showed the pair tumbling over each other as they wrestled over a plush Halloween pumpkin.

The cub was placed into the program because she was the only surviving cub of her mother’s litter, and cheetah mothers may abandon or neglect to feed their offspring in such cases.

The dog acts as both teacher and playmate to the cub in ways that humans cannot, Castaneda said. Cheetah cubs will learn to listen to their human trainers and do simple tasks like drinking from a water bowl by watching their furry pal.

ENORMOUS LION TERRIFIES PHOTOGRAPHER WITH LOUD ROAR -- THEN SMILES AT HIM

“Even if we wanted to play with her, we’re just not able to do it in the same way that a puppy can,” Castaneda said.

Castaneda said dog companions are common for lone cheetahs, adding that Kris and Remus make the sixth successful cheetah-dog pairing at the zoo.

The new best buds made their debut at the zoo over the weekend.