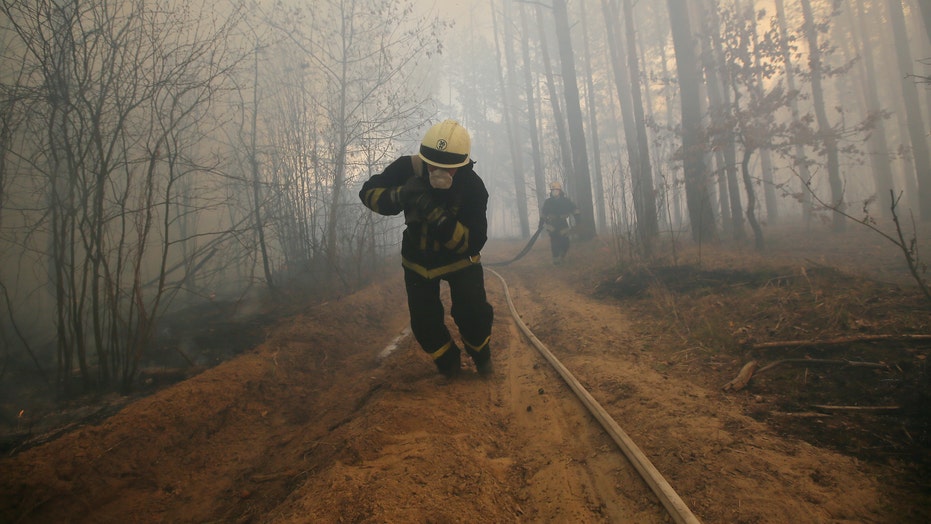 Learn about the world’s worst nuclear disaster that befell a Chernobyl, Ukraine power plant and left its effects still being felt today.

U.S. Forest Service experts have been working with their counterparts in Ukraine to help reduce the danger posed by wildfires near the site of the Chernobyl nuclear plant.

Earlier this year, forest fires in the radiation-contaminated area near the Chernobyl nuclear plant sparked concern about the potential release of contaminants.

The 1,000-square-mile Chernobyl Exclusion Zone was established after the April 1986 disaster at the plant that sent a cloud of radioactive fallout over much of Europe. The zone is largely unpopulated, although about 200 people have remained despite orders to leave.

In a recent blog post, the U.S. Forest Service explained that Alan Ager, a research forester from the agency’s Rocky Mountain Research Station, had been working on the problem of wildfires in the area contaminated by the Chernobyl disaster.

Firefighters extinguish a fire during a forest fire in Ragovka, Ukraine. Fire from the radioactive Chernobyl zone was approaching the village of Ragovka, April 10, 2020. (Photo by Stringer/Anadolu Agency via Getty Images)

A workshop in 2017 kicked off the collaboration between American and Ukrainian experts. After the workshop, Ager and his retired colleague Richard Lasko, the former deputy director of the Forest Service’s Fire and Aviation Management Division, built a wildfire simulation system that can be used to predict hot spots within the contaminated areas.

The map used data compiled by the Life Sciences University in Kiev. “One of the primary findings from the study revealed that tight controls on access to Belarusian Polesie Radioecological Reserve since the mid-1990s dramatically lowered the frequency of human-caused fires, which also lowered the probability of those fires spreading radionuclides,” said the U.S. Forest Service in the blog post.

Radionuclides refer to the radioactive form of elements.

Blazes in the Chernobyl area have been a regular occurrence. They often start when residents set dry grass on fire in the early spring — a widespread practice in Ukraine, Russia and some other ex-Soviet nations that often leads to devastating forest fires.

Researchers used the modeling system to identify the best locations for what are known as “fuel breaks” — areas where fires can be cut off from the “fuel” they need to grow and spread radionuclides.

In 2016, the U.S. Forest Service noted Ukraine set up the Chernobyl Radiation and Ecological Biosphere Reserve within the contamination zone. The biosphere contains areas designed for fire prevention and management.

Experts in Ukraine continue to work with the U.S. Forest Service to enhance these areas.

“The end result of this project is that the Ukrainians now have a state-of-the-science wildfire modeling system to guide decisions about managing wildfire risk in the contaminated areas,” said Ager in the statement.

In April, authorities in Ukraine said that the fires were extinguished. The country’s emergency services division said radiation levels in the capital, Kiev, about 60 miles south of the plant, were within norms.

Last year, in a separate project, Chernobyl’s ghostly Red Forest, one of the most radioactive sites on the planet, was mapped by specially equipped drones to measure the extent of its contamination.

Researchers from the U.K.’s University of Bristol, working as part of the National Centre of Nuclear Robotics (NCNR) traveled to the Chernobyl exclusion zone and harnessed drones to gain fresh insight into radiation levels at the stricken forest. This involved the first-ever use of an Unmanned Aerial Vehicle (UAV) to measure gammas and neutrons at the site, as well as the first use of a fixed-wing drone for Chernobyl radiation mapping.

In 2017, scientists published a new theory on the Chernobyl disaster that could shed fresh light on the world’s worst nuclear accident.