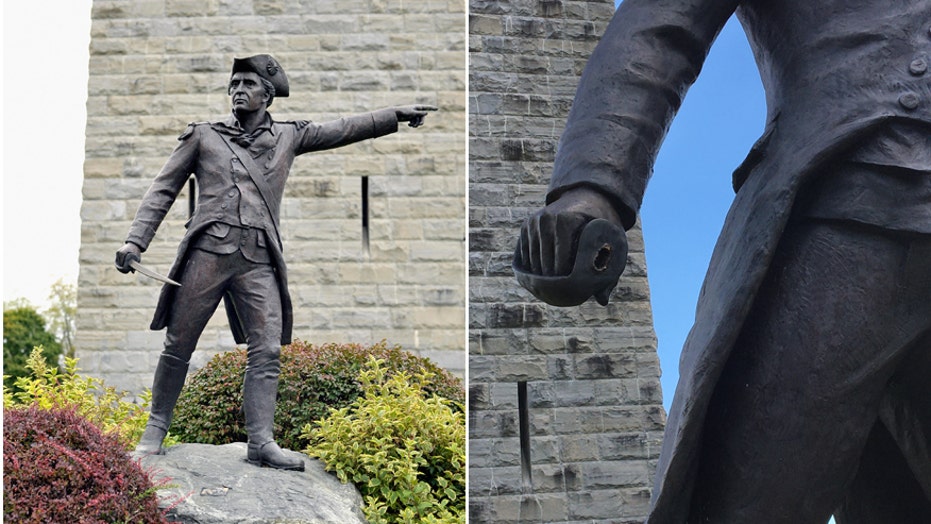 Brian Kilmeade on his new book

Officials in Vermont say that a bronze sword that recently went missing from the statue of a Revolutionary War general has been returned.

“Thankfully it was returned and discovered sticking in the ground next to the statue this morning,” said Laura Trieschmann, Vermont’s state historic preservation officer, in an email to Fox News Wednesday. “It is a separately cast piece and can therefore hopefully be reattached easily.”

While many statues have been targeted by protesters in the wake of George Floyd’s death in police custody, it is not clear why the sword was removed from the Stark statue.

The sword was returned and discovered sticking in the ground near the statue. (Vermont Division for Historic Preservation)

“We have no indications that the sword’s disappearance was linked to ongoing protests around the country that are targeting statues and no indications if it was intentional or accidental,” said Trieschmann, in the email. “Either way, we appreciate its return.”

The Bennington monument commemorates the battle on Aug. 16, 1777, when Stark led an American force to victory over British troops. The battle is regarded as a turning point in the Revolutionary War.

The statue was donated to the monument in 2000. “This statue was cast from a plaster model executed in 1889 by American sculptor Jon Rogers,” explains the Bennington Battle Monument, on its website. “Stark is in a heroic pose, stepping forward with an outstretched arm pointing toward the approaching British.”