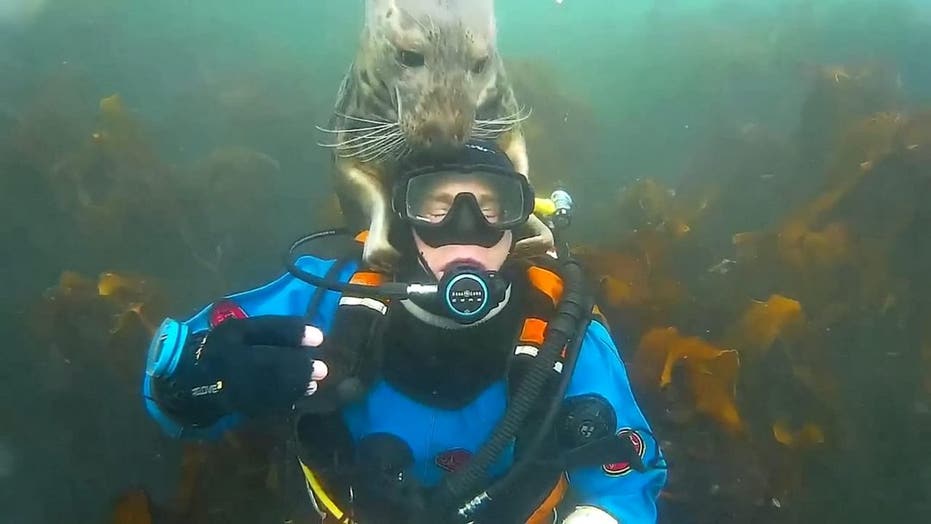 An English diver managed to get the experience of a lifetime after he took underwater images — and was embraced by a seal.

Ben Burville, an NHS doctor and visiting marine researcher at Newcastle University, was swimming near the Farne Islands during October 2019, when a seal suddenly swam up to him and patted him on his head, British news agency SWNS reports.

This is the moment a diver was photo-bombed and had an unexpected underwater cuddle -- from a seal. Ben Burville, 51, who has been diving with the animals or 20 years, was joined by the curious animal which was very interested in his headgear. (Credit: SWNS)

The 51-year-old, who hails from Morpeth, Northumberland, said he was calm while it happened, as he's been diving with the animals for nearly 20 years.

"They're very clever animals," Burville said. "They will try and prise the diving gear off my head -- but they know the difference between what is gear and what is my face. They wouldn't dig their flippers into my face."

Burville, who petted the seal's flipper and gave its face a playful rub, noted his 20-year experience swimming with grey seals made him feel at ease during the remarkable experience.

"During that time, they have taught me how to dive in a way that makes them feel relaxed, and move underwater in a way that they like," he added. "I'm very lucky that I get to do this in my spare time. I'm always very relaxed when my dive buddies are seals. It's a great way to de-stress underwater."

Grey seals are abundant in the British Isles, according to WildlifeTrust.org. Protected under British law since 1970, they can be seen year-round near the shore or resting on rocks to digest their food.

"Despite numbers dropping to only 500 in the early 20th century, it's estimated that there are now more than 120,000 grey seals in Britain, representing 40 [percent] of the world's population," WildlifeTrust wrote on its website.