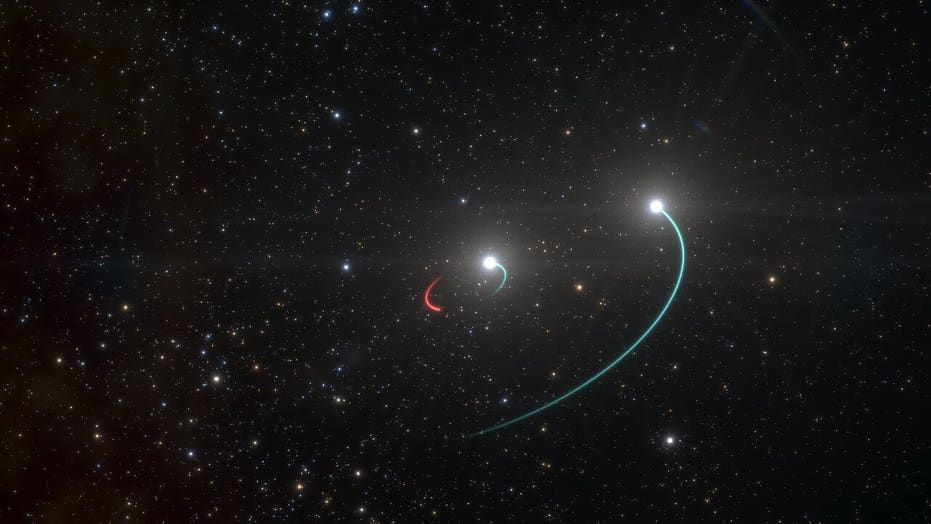 Researchers have discovered a black hole 1,000 light-years from Earth, the closest one known so far.

Dubbed HR 6819, the black hole is invisible. The star system was only spotted after two companion stars provided researchers with information on its whereabouts. It can be seen on a clear night in the Southern Hemisphere without the use of a binocular or telescope, making it the first black hole to be seen without tools.

"We were totally surprised when we realized that this is the first stellar system with a black hole that can be seen with the unaided eye,” said one of the study's co-authors, Petr Hadrava, Emeritus Scientist at the Academy of Sciences of the Czech Republic, in a statement.

This artist’s impression shows the orbits of the objects in the HR 6819 triple system. This system is made up of an inner binary with one star (orbit in blue) and a newly discovered black hole (orbit in red), as well as a third object, another star, in a wider orbit (also in blue). The team originally believed there were only two objects, the two stars, in the system. However, as they analyzed their observations, they were stunned when they revealed a third, previously undiscovered body in HR 6819: a black hole, the closest ever found to Earth. (Credit: ESO)

The star system is located in the Telescopium constellation, which was first discovered in 1751–52 by French astronomer Nicolas-Louis de Lacaille.

After looking at the system, the researchers found that one of the stars was orbiting the black hole every 40 days, thanks to the MPG/ESO 2.2-meter telescope at European Southern Observatory’s La Silla Observatory in Chile.

“The observations needed to determine the period of 40 days had to be spread over several months," one of the study's co-authors, Dietrich Baade, added. "This was only possible thanks to ESO’s pioneering service-observing scheme under which observations are made by ESO staff on behalf of the scientists needing them.”

Though the black hole itself is invisible (as all black holes are) and does not have violent interactions with objects around it, the researchers are nonetheless certain it's there.

“An invisible object with a mass at least 4 times that of the Sun can only be a black hole,” concluded the study's lead author, Thomas Rivinius.

There are a number of black holes in the Milky Way galaxy, but the discovery of this one, 1,000 light-years away, suggests there could be many more than have yet to be discovered. A light-year, which measures distance in space, equals 6 trillion miles.

“There must be hundreds of millions of black holes out there, but we know about only very few. Knowing what to look for should put us in a better position to find them,” Rivinius added.

One such system that's under consideration is LB-1, which may also be a triple star system, according to study co-author Marianne Heida.

"LB-1 is a bit [farther] away from Earth but still pretty close in astronomical terms, so that means that probably many more of these systems exist," Heida said in the statement. "By finding and studying them we can learn a lot about the formation and evolution of those rare stars that begin their lives with more than about 8 times the mass of the Sun and end them in a supernova explosion that leaves behind a black hole."

The research was published in Astronomy & Astrophysics.