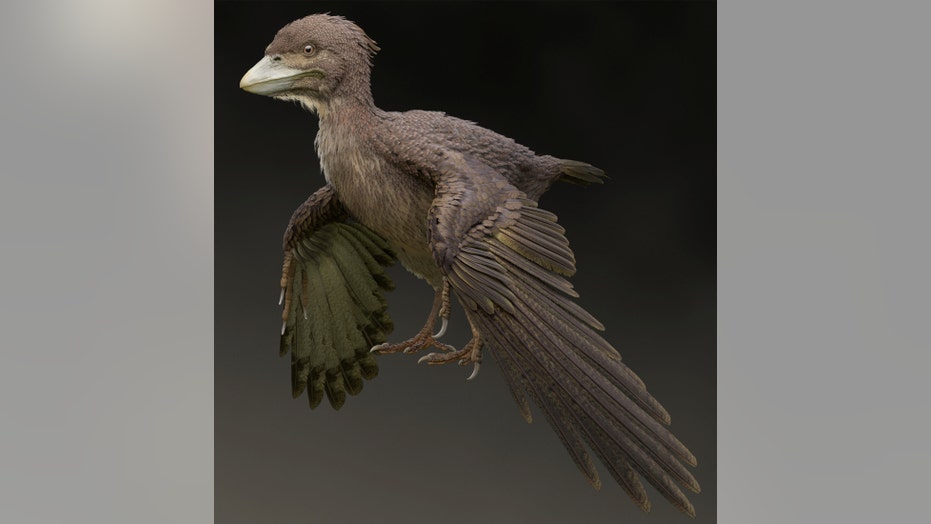 The fossils of a bird that lived 120 million years ago, during the age of dinosaurs, have been discovered in Japan.

Known as Fukuipteryx prima, the well-preserved bones were captured in 3D and were discovered outside Katsuyama, described as "a well-known dinosaur graveyard," according to British news agency SWNS.

One of the study's lead authors, Takuya Imai, noted that the bird had gray and brown feathers, was able to shake its tail and could flap its wings, but was unable to fly like modern-day birds.

One of the world's first birds that flew above the dinosaurs 120 million years ago has been unearthed in Japan. About the size of a pigeon, the creature had grey and brown feathers. The fossilized remains were entombed in rock that date back to the Early Cretaceous. (Credit: SWNS)

"It glided or flapped to fly for a short distance," Imai said in comments obtained by SWNS. "It did fly, but it was not very good at it." Imai also noted that the bird lived in a fluvial environment, with a temperate and warm climate, with a short, dry season.

F. prima is the first primitive bird from this time period, the Early Cretaceous, found outside China, the study noted. According to the study's abstract, it marks "the first record of the Early Cretaceous non-ornithothoracine avialan outside of the Jehol Biota and increases our understanding of their diversity and distribution during the time."

Imai said not much is known about its diet and it's "quite possible" it was preyed upon by other predators of the time.

It also shared several features with Archaeopteryx, thought to be the world's first bird, including a strong wishbone, pelvis and forelimbs.

The study has been published in the scientific journal Communications Biology.