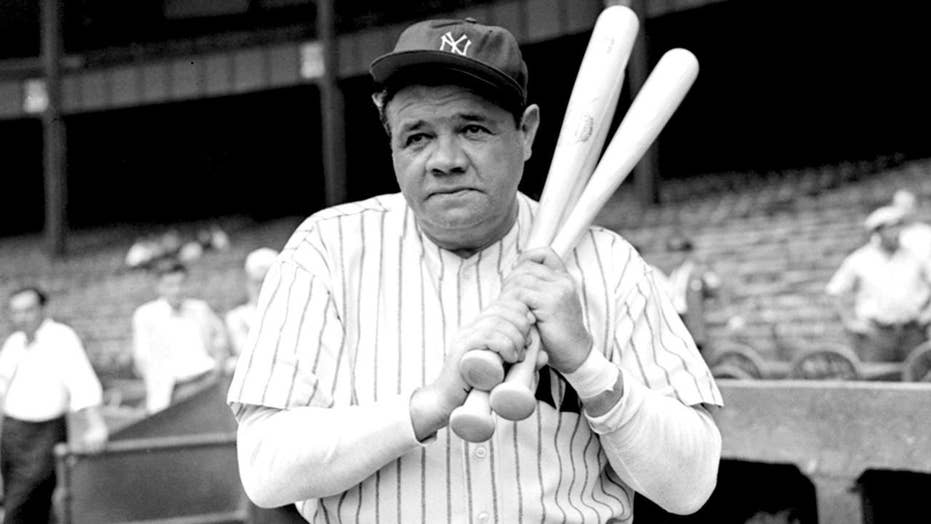 A long-lost radio interview with Babe Ruth, considered by many to be the greatest baseball player ever, has been found. The 1943 recording was made during World War II and gives intimate details of Ruth's life, touching on subjects such as how he gripped his bat and how he got his nickname.

Ellen Kelly found the M101-4 baseball card back in 1992. That year, she bought a piano for $25 at a family estate sale but had no idea how much her purchase would pay off.

“Best $25 I ever spent,” she told Sports Collectors Daily.

BABE RUTH BASEBALL CARD PURCHASED FOR $2 COULD BE AUCTIONED FOR UP TO $4.5M, REPORT SAYS

When she brought it to her home in Westernport, Md., she had a friend come over to fix the piano, which was out of tune and had a pedal that kept sticking, the outlet reported. The friend discovered about 112 baseball cards inside the pedal.

“He was looking at a pile of cards and I said, ‘Hey, there’s Babe Ruth,’” Kelly said.

She went on to tell the outlet she suspected her father or uncle hid the cards there because the previous owner of the piano, her Aunt Nora, was known for throwing “everything” away.

Though Kelly found the cards back in 1992, she decided to wait to sell them until this year, when her brother began having more serious issues with a medical condition and her truck broke down.

“Different people had offered to do it before for me, but it didn’t feel right,” Kelly told Sports Collectors Daily. “Someone offered me $40,000 for the Babe Ruth card and I thought, ‘That’s Babe Ruth, he’s worth more than that.’”

Through a friend, Kelly brought the cards to Beckett Vintage Grading, which graded the Ruth card as a 2.5 G-VG. The Ruth card was auctioned off as part of the Beckett Goodwin Masterpieces and Uncommon Commons 78 auction, which closed on Friday.

“We were expecting $60,000-$75,000 [for the card], so it far exceeded our expectations,” Steve Bloedow, Beckett Director of Auctions, said in a statement. “Ruth’s RC continues to soar in price and has clearly joined the hobby’s elite. The centering and eye appeal on this one was very strong so it’s not shocking that it exceeded all expectations.”

American baseball player George Herman Ruth, known as 'Babe' Ruth, is considered one of the greatest baseball players of all time. He started his career as a pitcher for the Boston Red Sox, but is best known for his time with the New York Yankees. (Photo by MPI/Getty Images)

The card, number 151 in the popular M101-4 pre-War set, according to Sports Collector Daily, shows Ruth as a pitcher for the Boston Red Sox.

The other cards were sold as one lot for $4,420, according to Forbes.

"The Great Bambino," considered one of the greatest baseball players ever, started his career as a pitcher with the Boston Red Sox before being switched to the outfield.

The bulk of his storied career was with the Yankees, from 1920 to 1934. Ruth retired with a batting average of .342, 2,214 RBIs and an OPS of 1.164 -- the best in baseball history. The baseball legend was known off the field as a party animal who enjoyed drinking and eating lavishly.

Interest in Ruth memorabilia has endured since his passing from cancer in 1948.