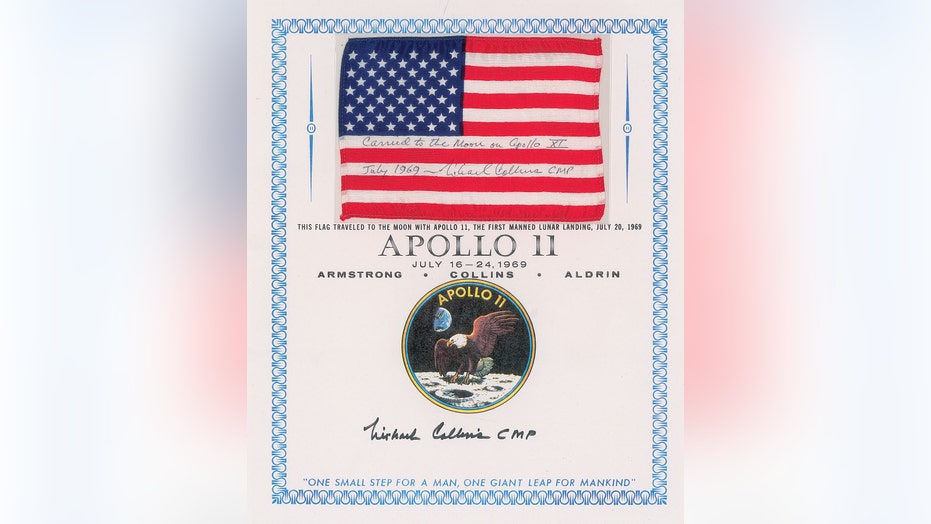 An American flag that was flown into orbit during Apollo 11 is among a host of artifacts from the historic mission up for auction this week.

The flag was signed and flight-certified by Apollo 11 Command Module pilot Michael Collins. "It’s an iconic and highly coveted relic flown to the moon on the most historic and avidly collected of all Apollo missions,” said Bobby Livingston, executive vice president at Boston-based auction house RR Auction, in a statement.

Other items in the auction include a page from the Apollo 11 flight plan that was flown into orbit on the Columbia Command Module. The page, which featured an Apollo 11 burn chart, was signed and flight certified by Collins and Buzz Aldrin and was expected to raise at least $20,000 at auction.

The flag that was flown in orbit during the Apollo 11 mission. (RR Auction)

A 70 mm positive film from Apollo 11’s Hasselblad camera is also up for auction. The film contained 126 of the most iconic images captured on the Moon’s surface by Neil Armstrong and Aldrin, according to RR Auction.

“The film roll was acquired from Terry Slezak, a member of the decontamination team at the Manned Space Center's lunar receiving lab, who was in charge of processing the film brought back from the Apollo moon landings,” explained RR Auction, in the statement.

The Burn Chart from the Apollo 11 flight plan. (RR Auction)

More recent space items in the auction include a small sterling silver mezuzah case and scroll that were flown aboard the Space Shuttle Columbia by NASA astronaut Jeff Hoffman from Feb. 2 to March 9, 1996. Mezuzahs, which contain verses from the Torah, are fixed to doorposts of Jewish homes.

Hoffman, who is now an MIT professor, said he planned to use the sale of the mezuzah and other items from his space career to fund a documentary project exploring his Jewish journey through his five space missions. The mezuzah had a pre-sale estimate of $15,000.

The 70mm film that was used during the Apollo 11 mission. (RR Auction)

Apollo artifacts have continued to be a source of fascination. Last year a checklist that traveled to the surface of the Moon with Armstrong and Aldrin sold at auction in New York for $62,500.

In 2017, a bag filled with Moon dust filled by Armstrong was sold by Sotheby’s for $1.8 million.

The mezuzah that was flown aboard the Space Shuttle Columbia. (RR Auction)

Last week, Collins revealed a previously unseen photo of the famous Moon landing crew members that he “found at the bottom of a box.”