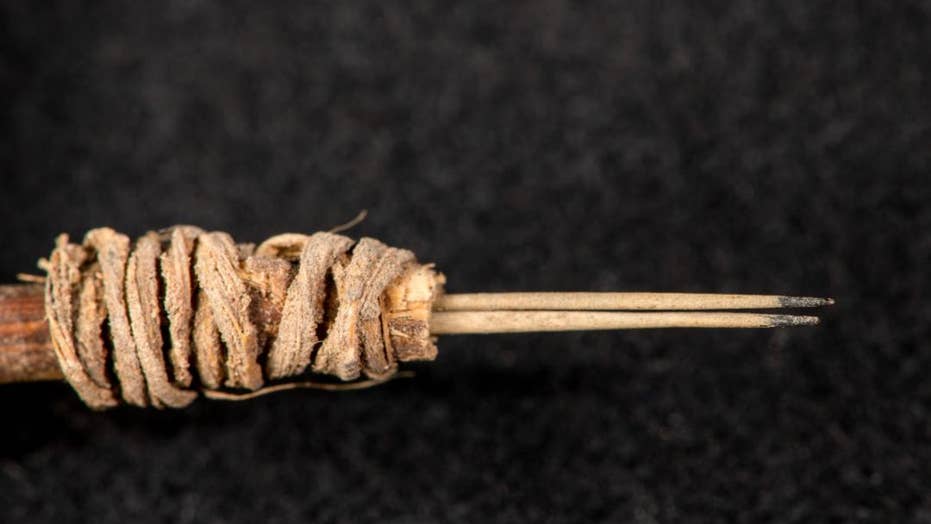 A 2,000-year-old tool that had been sitting inside a dusty box in a museum storage room for roughly four decades may be the oldest tattooing artifact ever discovered in western North America, Washington State University (WSU) archaeologists revealed this week.

Andrew Gillreath‑Brown, a 33-year-old anthropology PhD candidate at WSU, stumbled upon the "pen-sized instrument" from Utah while he was taking inventory of all the university's artifacts. According to WSU, researchers mainly rely on ancient artwork to better understand how tattoos played a role in indigenous cultures — so this particular discovery has "great significance."

“Tattooing by prehistoric people in the Southwest is not talked about much because there has not ever been any direct evidence to substantiate it,” Gillreath‑Brown said in an online statement. “This tattoo tool provides us information about past Southwestern culture we did not know before.”

Gillreath‑Brown, along with seven of his colleagues, recently published a paper detailing their rare find in the Journal of Archaeological Science.

Archaeologists know tattooing was prevalent in ancient days, particularly to religious groups and the wealthy who used it as a status symbol. But it's difficult to truly understand how the ink was used, as it typically isn't preserved in mummies.

Only recently did experts in the U.K. find the world's oldest figurative tattoos on two 5,000-year-old Egyptian mummies, including the oldest tattooed female ever discovered. Their incredible findings were published in the Journal of Archaeological Science last March.

So far, no signs of tattoos have been spotted on any preserved human remains in the southwestern U.S., WSU says. That's what makes this find so thrilling.

“When I first pulled it out of the museum box and realized what it might have been I got really excited,” Gillreath‑Brown said. “The residue staining from tattoo pigments on the tip was what immediately piqued my interest as being possibly a tattoo tool."

"The tool consists of a 3 ½ inch wooden skunkbush sumac handle bound at the end with split yucca leaves and holding two parallel cactus spines, stained black at their tips," the university explained.

Gillreath‑Brown then closely examined the tip of the 3-inch tool with a microscope and even did some test tattoos on pigskin "for good measure."

He's hopeful it will lead to more insight about cultures that date back thousands of years.

“[It] has a great significance for understanding how people managed relationships and how status may have been marked on people in the past during a time when population densities were increasing in the Southwest," Gillreath‑Brown added.