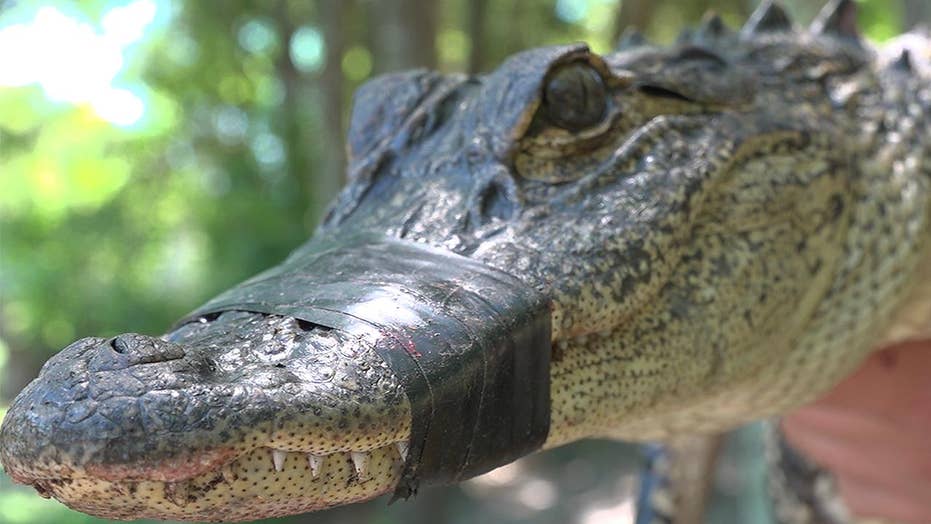 An 8-foot, 7-inch alligator knocked a wrangler over on the side of a highway in Texas, a video showed.

Wilderness Animal Control was called to remove the 170-pound gator from the side of U.S. 59 near Cleveland, Texas, on Wednesday morning, according to Chron.com.

"I pulled it in myself but it took three of us to pin him down," André Coetzee, who owns Wilderness Animal Control, told the outlet.

The animal control service posted a video of the encounter on Facebook after the gator had been wrangled.

At the beginning of the video, two men can be seen in control of the gator, with one man -- Coetzee -- holding a cable they had gotten around the gator’s neck and the other on top of the gator while they tried to tape its mouth shut.

However, as Coetzee let go to get the tape, the gator rolled the man off its back, opening its mouth to the wranglers, who managed to regain control again with the cable.

The gator fought back and continued to roll, trying to escape the cable and the wranglers.

Eventually, two men were able to hold the gator down, with a third person helping to hold its mouth closed while Coetzee taped it.

Coetzee told Chron.com the gator was taken to a nearby marsh, where it was released. He said Wilderness Animal Control has already captured four gators this year.

"With all the rain, we're getting these calls daily," Coetzee told the outlet. "It's also mating season, so the males are moving around a lot to find mates. Since there is water everywhere, they don't have to travel far to get from one puddle to another."

According to the South Carolina Department of Natural Resources, alligators begin courting in April and breed in late May and early June.

Warmer weather also revs up the prehistoric predators' metabolism, making them more active and aggressive as they hunt for prey and mate in the coastal South.