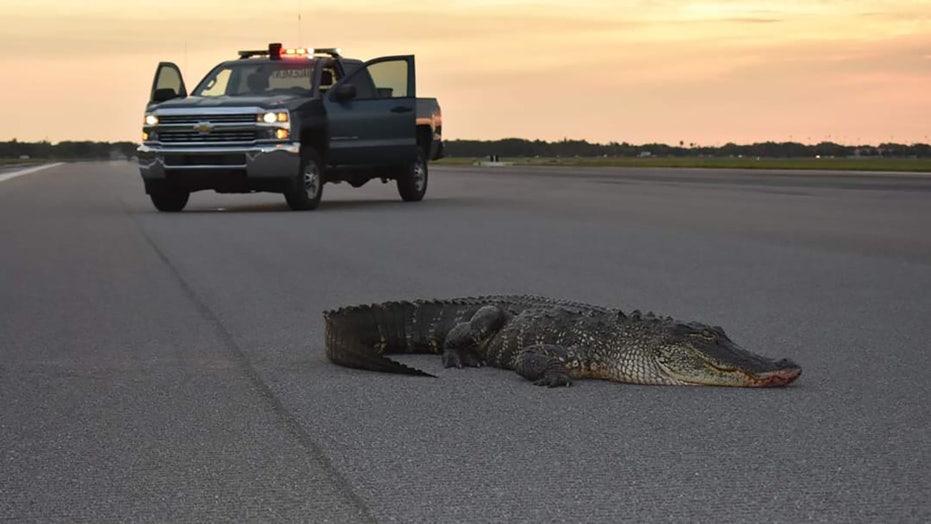 A "friendly" alligator was discovered Tuesday “preparing for take-off” on the runway of an Air Force base in Florida, officials said.

Staff said they spotted the large reptile lounging on a flight line at the MacDill Air Force Base, located on a peninsula in Tampa Bay.

“Your friendly, #TeamMacDill gator - preparing for take-off,” the base joked on Facebook.

While gators are regularly seen in the bodies of water surrounding the base, they aren’t frequent visitors to the flight line. The base’s wildlife manager told the Air Force Times this was the first time he’s seen one on a runway in his five years on the job.

Safety office personnel coaxed the gator into the bucket of a small front-end loader and relocated the trespasser to its probable home near the base, MacDill spokesman 2nd Lt. Brandon Hanner told the news outlet. The gator was reportedly not harmed during its removal.

The gator’s visit was early enough so that it didn’t put any aircraft in danger, Hanner told the outlet.

Florida alligators have recently made news for popping up in other unexpected places. A three-legged gator followed a woman home from a golf course in Bonita Springs and reportedly "stared inside for hours."