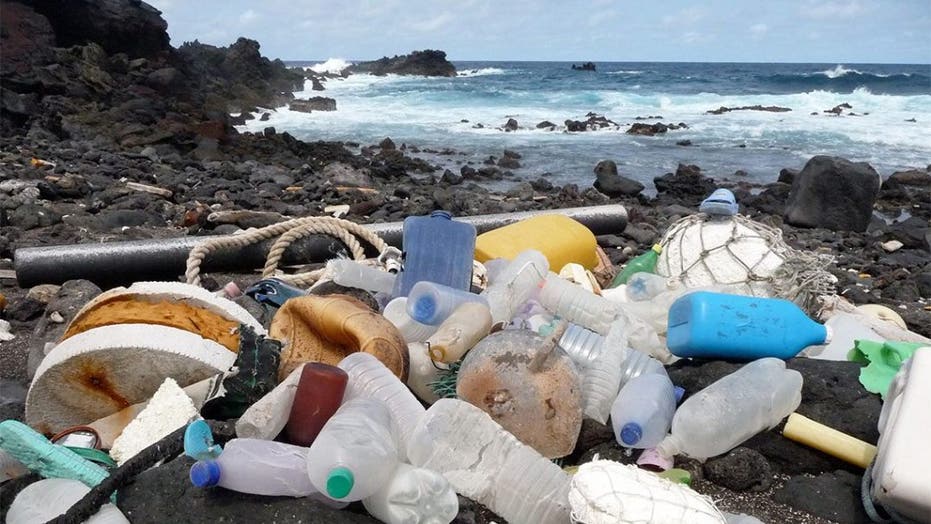 A newly published study is warning that there will be 53 trillion metric tons of plastic pollution in the world's rivers, lakes, and oceans by 2030.

The research, published in Science, found that humanity is on track to put 53 million megatons (the equivalent 53 trillion tons) into the world's waterways, even if severe measures are taken to reduce the plastic waste currently being produced.

“Unless growth in plastic production and use is halted, a fundamental transformation of the plastic economy to a framework based on recycling is essential, where end-of-life plastic products are valued rather than becoming waste,” said University of Toronto assistant professor and study co-author Chelsea Rochman, in a statement.

Ascension Island in the South Atlantic Ocean is yet another remote island littered in plastic waste (Credit: Marcus Eriksen)

PLASTIC WASTE IN OCEANS WILL TRIPLE BY 2040, RESEARCHERS SAY

“Even if governments around the world meet their ambitious global commitments, and other countries join those efforts to curb plastic pollution, worldwide annual emissions to rivers, lakes, and oceans could be as much as 53 million metric tons by the year 2030,” the study's lead author, Stephanie Borrelle, added. “That’s far beyond the 8 million metric tons amount that was declared unacceptable in 2015.”

Currently, the researchers estimated that between 24 million and 34 million metric tons enter the world's waterways every year.

The planet needs to reduce plastic between 25% and 40%, boost waste collection and management to "at least 60%" for all the world's economies and recover 40% of all plastic emissions via cleanup, the researchers stated.

"To put that last number into people power, the cleanup alone would require at least 1 billion people participating in Ocean Conservancy's annual International Coastal Cleanup," Borelle added. "This would be a Herculean task given this is 660 times the effort of the 2019 cleanup."

A separate study published in July issued a similar dire fate. That research estimated 29 million metric tons of plastic pollution will enter the ocean each year by 2040, up from 11 million currently.

Even if the world's populations were to take the prescribed measures to curb the amount of pollution, the future is bleak.

“The global community must coordinate a fundamental transformation of the plastics economy, one that reduces the amount of virgin plastic production and reimagines how we make use and dispose of plastic materials,” Rochman explained.

A study published in April 2019 found that plastic pollution in the world's oceans could have a $2.5 trillion impact, disrupting "almost all marine ecosystem services," suffocating every industry it touches.

Additional research, published in May 2019, found plastic pollution in oceans may be suffocating the planet – by harming the tiny microorganisms "thought to be responsible for up to 10 percent of ... total global oxygen production."