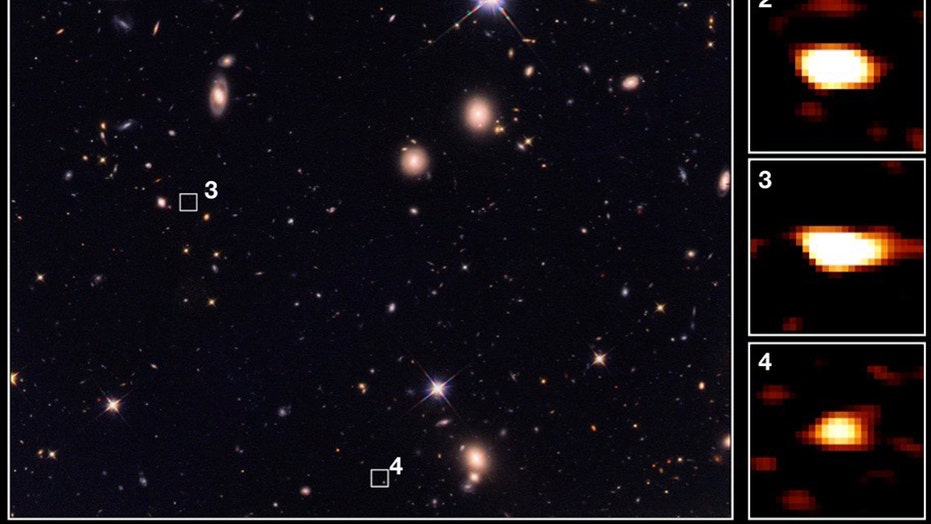 This isn't your typical story about a galaxy from a long time ago that's also far, far away.

Astronomers have spotted 39 enormous galaxies that are billions of light-years away from Earth, creating large numbers of stars the size of our Sun. They've also identified several other celestial objects previously unknown to humanity.

“This is the first time that such a large population of massive galaxies was confirmed during the first 2 billion years of the 13.7-billion-year life of the universe. These were previously invisible to us,” said researcher Tao Wang in a statement. “This finding contravenes current models for that period of cosmic evolution and will help to add some details, which have been missing until now.”

Ancient galaxies from the study are visible to ALMA (right) but not to Hubble (left). (Credit: 2019 Wang et al.)

Wang, who published the findings in the scientific journal Nature, along with several other researchers, said the discovery could rewrite the days of the early universe for scientists and drastically alter our view of space.

“For one thing, the night sky would appear far more majestic. The greater density of stars means there would be many more stars close by appearing larger and brighter,” explained Wang. “But conversely, the large amount of dust means farther-away stars would be far less visible, so the background to these bright close stars might be a vast dark void.”

The Hubble Space Telescope, which is being replaced by the James Webb Telescope in a few years, was unable to spot them because of their distance and the type of light they give off.

The discovery is of particular interest to astronomers because the objects are being viewed as they looked during the first 2 billion years of the universe. But now, because the light coming from them is so faint and weak, Wang said it was tough to convince his colleagues the galaxies were indeed that old.

"Our initial suspicions about their existence came from the Spitzer Space Telescope’s infrared data,” Wang said.

“But ALMA has sharp eyes and revealed details at submillimeter wavelengths, the best wavelength to peer through dust present in the early universe," Wang continued. "Even so, it took further data from the imaginatively named Very Large Telescope in Chile to really prove we were seeing ancient massive galaxies where none had been seen before.”