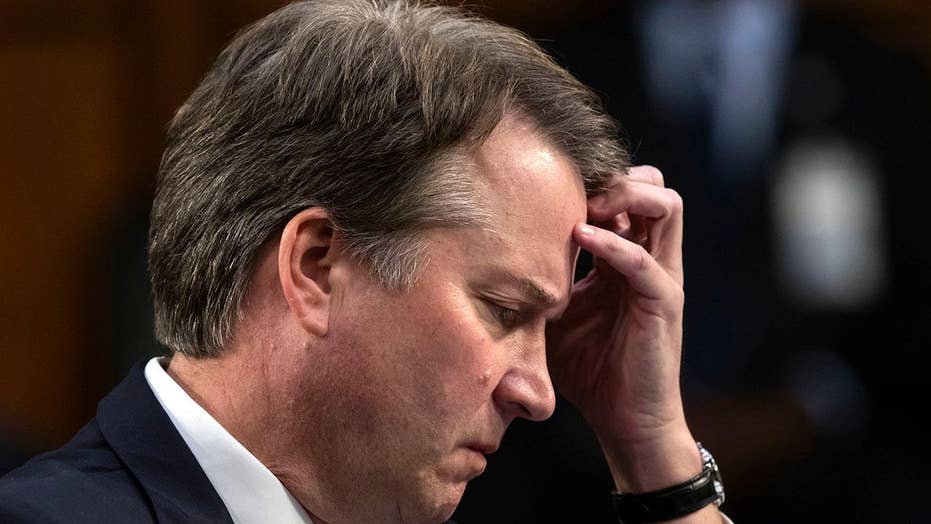 Questions of political impact of showdown over Kavanaugh

Analysts: Some red-state Democrats may see the Kavanaugh allegations as cover to oppose Trump's nominee; reaction on 'Outnumbered.'

The Yale Law professor accused of saying Judge Brett Kavanaugh only had law clerks who "looked like models" blasted the claim, saying the Supreme Court nominee's only "litmus test" when hiring is "excellence."

The Guardian reported Thursday that Yale Law Professor Amy Chua advised students that it was "no accident" that Kavanaugh’s female clerks all “looked like models,” and reportedly provided fashion advice to female students preparing to interview with him.

Chua denied the claims, noting that Kavanaugh’s only “litmus test” when hiring has been “excellence.”

“He hires only the most qualified clerks, and they have been diverse as well as exceptionally talented and capable,” Chua said in a statement. “There is good reason so many of them have gone on to Supreme Court clerkships; he only hires those who are extraordinarily qualified.”

Of the 48 clerks who worked for Kavanaugh over 12 years on the United States Court of Appeals for the District of Columbia Circuit, 25 were women.

In July, Chua penned an op-ed for The Wall Street Journal, endorsing Kavanaugh’s nomination to the high court and praising him for being a “mentor to women.”

“As I wrote in the Wall Street Journal, he has also been an exceptional mentor to his female clerks and a champion of their careers,” Chua said in a statement. “Among my proudest moments as a parent was the day I learned our daughter would join those ranks.”

Chua’s daughter is a clerk in Kavanaugh’s chambers.

A former Kavanaugh clerk from 2007 to 2008, Porter Wilkinson, also blasted the claims, calling them "offensive."

“Judge Kavanuagh hires law clerks based solely on their intellect and qualifications," Wilkinson said in a statement to Fox News. “The only thing all of us have in common is that we worked hard and proved ourselves able to meet his rigorous substantive standards. Otherwise, the 48 of us are diverse by gender, race and ethnicity, sexual orientation, geography, political persuasion, religion, education, socioeconomic background, and so much more.”

She added: “It is offensive and demeaning for anyone to suggest that Judge Kavanaugh hired law clerks based on anything other than merit.”

Kavanaugh is currently facing intense scrutiny after allegations surfaced last week that he had sexually assaulted a woman while in high school in the 1980s.

Christine Blasey Ford, the woman who made the accusations, claimed that at a party 36 years ago, Kavanaugh pinned her down, tried to remove her bathing suit and put his hand over her mouth when she attempted to scream. Ford’s attorney, Debra Katz, said her client considered this to be “an attempted rape.”

Kavanaugh has vehemently denied the allegations and has offered to testify before the Senate Judiciary Committee, again, under oath.

Through her attorneys this week, Ford demanded that the FBI launch an investigation into the allegations prior to her appearance. On Thursday afternoon, Ford's attorneys said she would be willing to testify should the committee be able to guarantee her safety.

“This is a completely false allegation. I have never done anything like what the accuser describes—to her or anyone,” Kavanaugh said in a statement Monday. “Because this never happened, I had no idea who was making the accusation until she identified herself [Sunday.]”

More than five dozen women who knew Kavanaugh while in high school wrote a letter in his defense, calling him a “good person.”