EXCLUSIVE – WinRed, the new GOP online fundraising platform designed to compete with Democrats in the battle for small-dollar campaign donations, has raised more than $30 million since launching three months ago, with top officials crediting the Democrats’ impeachment push for a big spike in fundraising over the last week, Fox News has learned.

WinRed raised just over $30 million in the third fundraising quarter, which began in July and ended Monday. The online platform is used to raise money for President Trump’s re-election, campaign committees and various Republican candidates across the country.

WinRed has raised over $13.7 million from over 276,000 contributors since the announcement from Pelosi, D-Calif., he said.

The platform has been off to a stronger start than the Democrats’ version which launched in 2004. FEC records indicated the $30 million raised through WinRed was more than what ActBlue -- the Dems' big online fundraising platform -- raised in its first three and a half years. The records showed that ActBlue raised $99,000 in its first quarter of operations from June to August 2004. 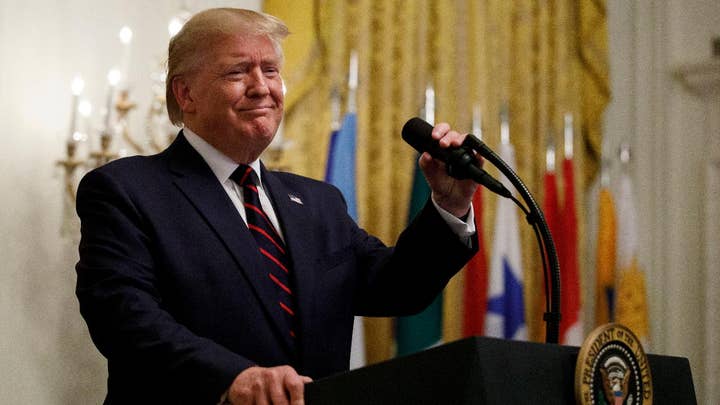 “They were starting in a position that didn’t have all the party behind it,” Lansing said of ActBlue. “The DNC wasn’t on ActBlue until several years ago. Hillary and Obama weren’t on ActBlue,” he said, referring to former President Obama and ex-presidential candidate Hillary Clinton.

But, ActBlue has grown into a fundraising behemoth since then: it raised $246 million in the second fundraising quarter of this year.

Lansing said WinRed has benefitted from top Republican campaigns and organizations embracing it from the beginning. WinRed launched in late June, and this was the platform’s first full fundraising quarter.

“We’re starting off with a big bang where everyone’s on it, everyone’s excited about, and I think it reflects in that big number in our first three months,” he said.

Those running WinRed were hoping to raise $20-25 million this quarter but blew through it after last week’s impeachment drama. The days leading up to the end of the quarter – when campaigns would ramp up fundraising appeals – also could see increases in donations. WinRed had over 639,000 donations this quarter.

“Impeachment helped a lot with that,” Lansing said.

Republicans have boasted of increased fundraising in the wake of the impeachment inquiry announcement. Officials said the Trump campaign, along with the RNC, brought in $5 million in the 24 hours after Pelosi’s announcement. National Republican Congressional Committee officials also said its online fundraising soared by 608 percent on the day Pelosi announced the inquiry.