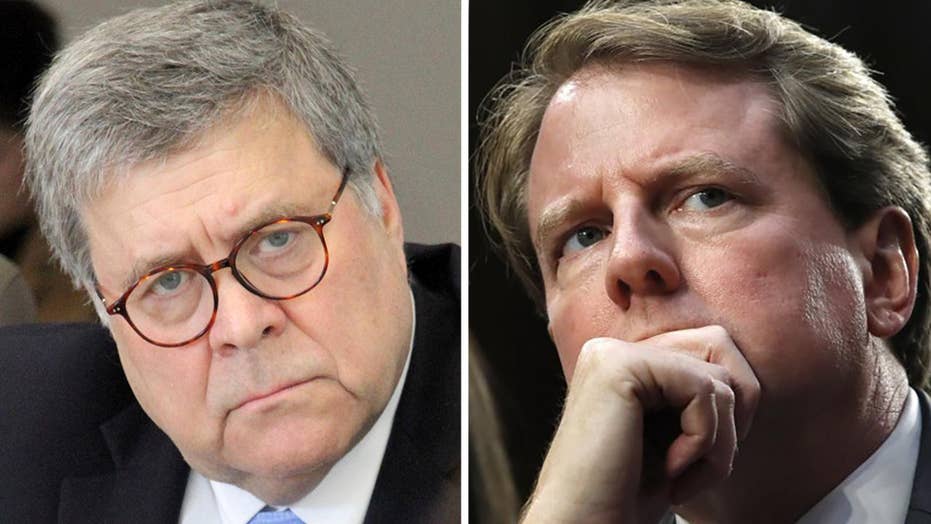 The Department of Justice maintains that they have been forthcoming in providing documents; Griff Jenkins reports.

Attorney General William Barr compared his arrival at the Justice Department to the type of situation soldiers faced before D-Day.

"As we've been watching the coverage of June 6, 1944 D-Day, I had the thought that my arrival this time felt a little bit, I think, like jumping into Sainte-Mère-Église on the morning of June 5, trying to figure out where you could land without getting shot," he said at the FBI Academy on Friday.

Thursday marked the 75th anniversary of D-Day, the day when Allied soldiers stormed the beaches of Normandy in an effort to challenge the Nazi stronghold in Northern Europe.

President Trump spent that day at Normandy, commemorating the sacrifice of American veterans as he faced impeachment calls and investigations from Democrats in Congress.

“To more than one hundred and seventy veterans of the Second World War who join us today – you are among the very greatest Americans who will ever live," he said.

While in Normandy, Trump also spoke with Fox News about the Russia investigation and House Speaker Nancy Pelosi, D-Calif., who resisted impeachment but also reportedly said she wanted to see Trump in "prison."

“She’s incapable of doing deals, she’s a nasty, vindictive, horrible person, the Mueller report came out, it was a disaster for them," he said of Pelosi.

Pelosi, who also visited Normandy, refused to discuss impeachment during an interview on D-Day but has repeatedly criticized the administration, especially the attorney general.

From the start, Barr was suspected of bias due to a memo he wrote which said he thought Trump was well within his powers when he fired former FBI Director James Comey -- one of the main issues in suspicions surrounding whether the president obstructed justice.

Since his arrival, Barr has taken actions that prompted both media figures and congressional Democrats to accuse him of shielding the president from warranted scrutiny. Barr has also come under fire for pursuing the president's directive to de-classify intelligence material in order to uncover information related to the Russia probe's origins.

That prompted an inquiry from House Intelligence Committee Chairman Adam Schiff, D-Calif., who blasted the AG as unworthy of that title. Rep. Eric Swalwell, D-Calif., who also serves on that committee, said that while he was reluctant to impeach Trump, he was ready to pursue that path with both Barr and Treasury Secretary Steve Mnuchin.

Democrats seemed poised to at least hold Barr in contempt as his Department refused to comply with House Democrats request for more information surrounding the investigation.

Citing Barr's refusal, House Democrats proposed giving congressional investigators the power to "“to initiate or intervene in any judicial proceeding before a Federal Court." Rules Committee Chairman James McGovern, D-Mass., whose committee would take up the resolution, vowed to hold the administration accountable.

“We will not allow this president and his administration to turn a blind eye to the rule of law," he said.