How far should the White House go to identify op-ed author?

Lots of them. About lots of things.

A host of administration officials “deny” they wrote the anonymous op-ed in The New York Times which blistered President Trump.

The White House denies a panoply of things Omarosa Manigault Newman alleges in her book about Mr. Trump.

Rep. Chris Collins, R-N.Y., denies he engaged in insider trading and entered a plea of not guilty.

Rep. Keith Ellison, D-Minn., denies he was physically abusive to a former girlfriend.

Rep. Jim Jordan, R-Ohio, denies he knew anything about sexual abuse when he served as an assistant wrestling coach at Ohio State in the 1980s and 1990s. 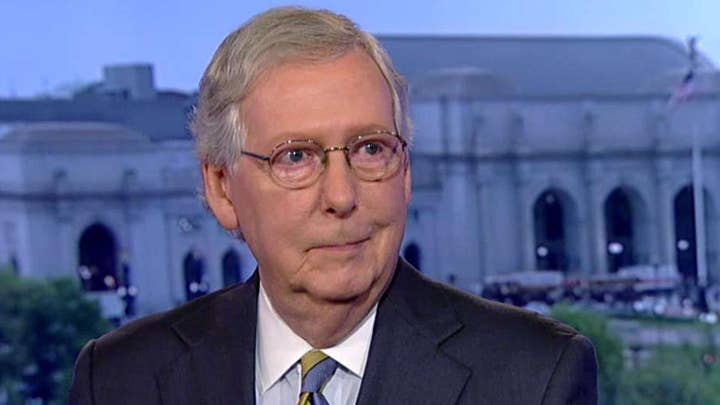 Both Senate Majority Leader Mitch McConnell, R-Ky., and House Speaker Paul Ryan, R-Wis., deny there will be a government shutdown come October – despite repeated machinations by President Trump to the contrary.

During an appearance on Fox News with Bret Baier, McConnell declared there was “no chance of a government shutdown.” When Baier queried further, the Kentucky Republican replied “zero.”

“We have a very good agreement with the president,” said Ryan after a bicameral, GOP leadership meeting with Mr. Trump last week about spending bills.

Many find that hard to believe, considering the president is threatening a shutdown over funding for his border wall.

Yours truly asked the speaker if the political oscillation merely reflects how this president rolls.

Some Republicans deny that a “blue wave” could be on the way in the midterm elections.

Democrats, supposedly schooled in their political misfortunes of 1994, denied that a red wave lurked in the 2010 midterms.

Some Democrats deny that the economy is humming along, in an effort to gaslight Trump.

A bunch of Democratic senators express interest in running for president in 2020. There may even be Republican primary challengers to Trump. But so far, everyone denies they’re actually doing so.

Lots of House Democrats deny they’re running for speaker. Or minority leader. Or minority whip. It all hinges on which side wins the House this fall. People are certainly positioning themselves for a bid. But most would deny they were running against House Minority Leader Nancy Pelosi, D-Calif., or Minority Whip Steny Hoyer, D-Md.

House Majority Leader Kevin McCarthy, R-Calif., is eyeing the speakership. House Majority Whip Steve Scalise,  R-La. denies he may outright challenge to McCarthy. But Scalise is certainly positioning himself for something.

There’s a reason why Twitter banned Alex Jones a few days ago.

Denial happens a lot in politics. It starts because the public and the pesky press corps have questions. Denial also happens because, well, people are involved. People deny things. Major political leaders find that despite their political prowess, they can’t control bad things happening around them. So, they’re thrust into denial. Or, they’ve built their reputation on not taking guff from anyone. So, they deny bad things, even if they’re true. They develop an intolerance of letting the bad seep in. After all, they’re the ones who supposedly have the answers. To admit defeat or failure is the last thing anyone wants to accept in their political leaders.

Some politicians find themselves in denial because of overconfidence. Most people who wade into politics and public service aren’t shrinking violets. They’re doers. Changers. Persons of action. They’ve squirmed out of a million jams before. So deny it and wiggle free again.

Or, again, maybe the allegations and insinuations or even the criminal charges aren’t true.

Maginault Newman leveled some pretty serious charges against the president. But, she’s not known for her credibility. On the other hand, most administration officials who say they didn’t pen the op-ed boast lots of credibility. Chris Collins and Duncan Hunter Jr. will get a trial. Maybe they did nothing wrong. We’ll find out. It’s hard for Jim Jordan to prove he didn’t know something three decades ago. And Keith Ellison is defending himself against a purported video which no one has seen.

Truth does still win out, after all.

That said, politicians regularly find themselves on the defense against “scurrilous” accusations, some of which are false. These allegations are engineered to project a figure in a bad light. And, even if the assertion isn’t true, most Americans don’t pay close enough attention to know what someone was accused of doing and whether the charge was proven or disproved. Voters just know that the whiff of controversy follows around certain public figures.

That may be unfair. But that’s public life and politics.