The surprise announcement that Sarah Sanders plans to leave the Trump administration has sparked a heated contest to succeed her as White House press secretary, with President Trump telling Fox News “a lot of people” are angling for the gig.

Speaking to “Fox & Friends” on Friday, the president declined to name who he is considering for the job but said, “I have a lot of people that want it -- a lot of great people -- and sometimes you have so many that makes it more difficult.”

Deputy Press Secretary Hogan Gidley, former State Department spokesman Heather Nauert and Melania Trump adviser Stephanie Grisham are among those believed to be under consideration for the role, according to one source close to the White House.

Gidley is close to Sanders, having previously worked on her father Mike Huckabee’s presidential campaigns. He is currently the principal deputy White House spokesman.

Nauert, a former Fox News journalist, was the top State Department spokesman until she was nominated by Trump to serve as United Nations ambassador. She ended up withdrawing her name from consideration for the U.N. job earlier this year. 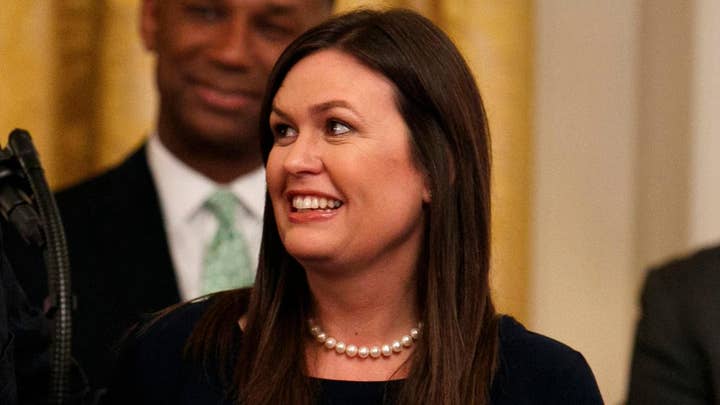 Grisham is a top aide and spokeswoman to first lady Melania Trump. “Tough, smart, has the confidence of the family,” said one former senior Trump adviser.

Asked about the possibility of choosing her during his “Fox & Friends” interview, Trump said, “Stephanie is terrific.”

Others believed to be under consideration, according a source, include Tony Sayegh, who left his job as Treasury Department spokesman this week, and State Department spokeswoman Morgan Ortagus, a former Fox News contributor.

'I think Anthony should stay where he is right now.'

— President Trump, on the possibility of Anthony Scaramucci returning to the White House

But Trump, during his interview, did seem to rule one person out: former White House communications director Anthony Scaramucci.

“I like Anthony, and he’s been very nice and all, but I think Anthony should stay where he is right now,” Trump said.

The role of White House press secretary, while still prominent, has changed during the Trump administration.

Under Sanders, the traditional televised press briefings in the James S. Brady Press Briefing Room have largely gone away. Earlier this year, the president said he told Sanders “not to bother” giving those regular briefings anymore, saying the press covers her “rudely and inaccurately.” It’s now become more common for White House spokespeople to take questions from reporters in informal gaggles outside the West Wing.

The president, during an event at the White House on Thursday afternoon, called Sanders up to the podium to praise her work. Trump also said he hopes she will run for governor of Arkansas, a job her father once had.

In brief remarks Thursday, Sanders said working at the White House was “the honor of a lifetime.”

“I couldn't be prouder to have had the opportunity to serve my country and particularly to work for this president,” she said.

“I'm going to continue to be one of the most outspoken and loyal supporters of the president and his agenda and I know he's going to have an incredible six more years and get a lot more done,” Sanders said.