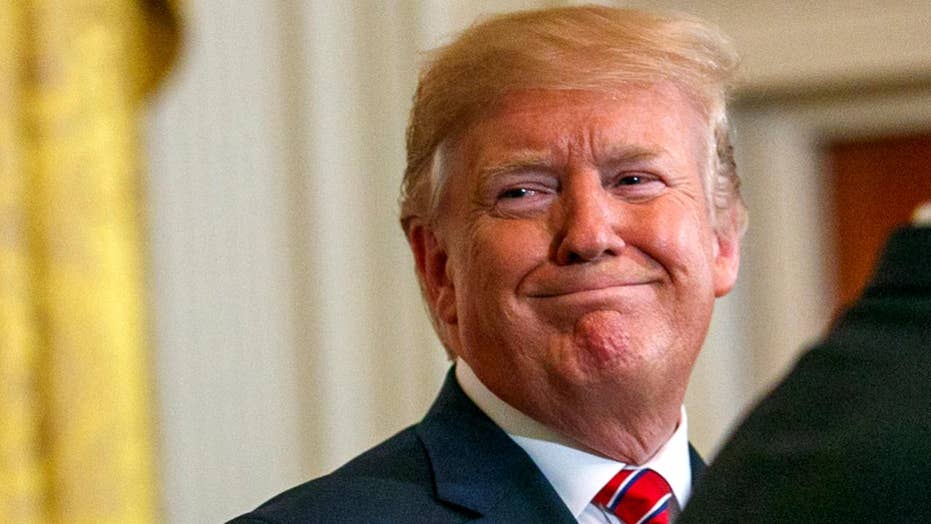 Trump says he would accept opposition research from a foreign government

White House deputy press secretary Hogan Gidley says President Trump would turn over any information given to him by a foreign government to the FBI if he felt there was wrongdoing.

White House Deputy Press Secretary Hogan Gidley said Thursday that the media is distorting President Trump’s latest controversial comments on taking opposition research from foreign nations and that the president would turn over any “nefarious” information to the FBI.

Appearing on “America’s Newsroom” with hosts Sandra Smith and Eric Shawn, Gidley asserted, “He said he would do both…He was very clear: if he got any information and it was nefarious or ill-gotten in any way and it was wrongdoing, he would absolutely take it to the FBI. And, for the media to try to push this another way is absolutely ridiculous.”

In a wide-ranging interview from the Oval Office that aired on Wednesday night with ABC’s George Stephanopoulos, the president acknowledged that he would be willing to listen to foreign governments if they approached him with information on a political rival.

His son Donald Trump Jr.’s role in a 2016 meeting with a Russian lawyer offering negative information on Hillary Clinton was a focus of Special Counsel Robert Mueller's probe of Russian meddling. Mueller’s investigation did not establish a criminal conspiracy between Russia and Trump's campaign.

But FBI Director Christopher Wray told lawmakers that Donald Trump Jr. should have called his agency to report the offer.

Gidley says he was in the room during the ABC interview and “Look, I wish that the media would take the time to look at the full clip. I was standing just feet away from the president in his exchange with George Stephanopoulos. It was very clear: the president said if there was wrongdoing, of course he’d turn it over to the FBI.”

Democrats and Trump critics have pounced on the comments, with a number of 2020 hopefuls leading the charge.

Joe Biden wrote, "President Trump is once again welcoming foreign interference in our elections. This isn’t about politics. It is a threat to our national security. An American President should not seek their aid and abet those who seek to undermine democracy."

"This is just the latest example of what Vice President Biden meant when he said that Mr. Trump is an existential threat to our country," anti-Trump former CIA Director John Brennan wrote on Twitter. "'Unfit to be President' is a gross understatement. @realDonaldTrump is undeserving of any public office, and all Americans should be outraged."

Virginia Democratic Rep. Don Beyer wrote: "Trump just blew way past 'no collusion,' he's broadcasting his willingness to receive help from a hostile foreign power in 2020. He's glad his son didn't call the FBI about Russian help and says he wouldn't call them in 2020. Yes we absolutely need an impeachment inquiry."

Beyer, in May, became the first Virginia Democrat to call for Trump's impeachment. Other political commentators shared his view of Trump's comments.

However, Conservatives pointed out that these Democrats have been silent on multiple cases of alleged high-level liberal political outreach to foreign operatives and agents, including the Clinton campaign and the Democratic National Committee’s funding of the anti-Trump “Steele dossier” by former British spy Christopher Steele.

Senator Lindsey Graham, R-S.C., told reporters the president’s comments were a “mistake of the law” and that he hopes Democrats would take this statement seriously as it already happened in 2016 with the inception of the infamous Steele dossier.

“What Lindsey Graham did point out was the fact that the Hillary Clinton campaign actually paid for information, got it, and it was used by the FBI --  weaponized,” Gidley said on "America's Newsroom." “We now know that at the upper echelons of the FBI, the very top -- with Strzoks and the Pages, the Comeys and McCabes of the world who now either were fired or resigned in disgrace -- they were the ones who weaponized that agency against this president with disproven, discredited, and debunked information at this point.”

“The hypocrisy here knows no bounds from the Democrats and from the media. They allowed the Clinton campaign to do this,” Gidley said.

“There’s been no collusion, no corruption, no obstruction…We now know that for a fact and the media continues to nitpick and take things out of context this president says instead of focusing on how we got here in the first place which is nefarious actions from the Crooked Hillary Clinton campaign.”