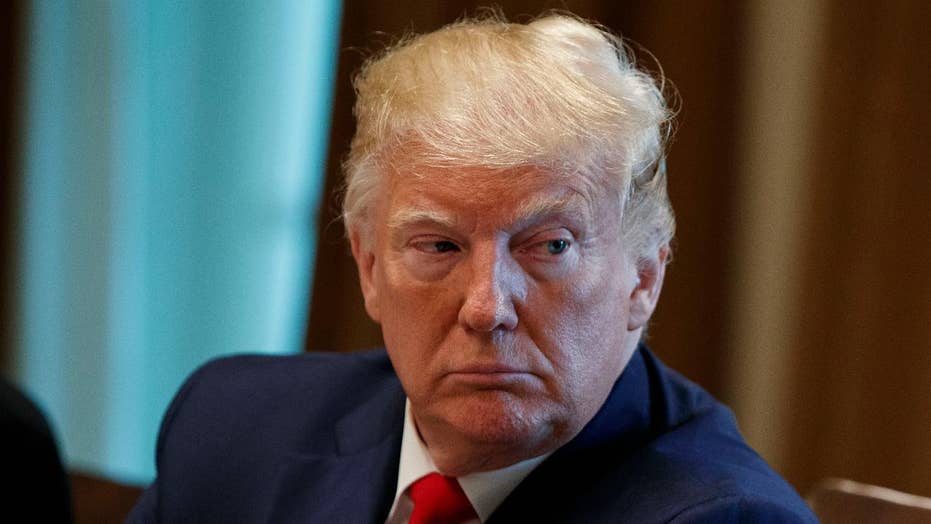 President Trump discusses Iran being implicated in assaulting oil takers in the Gulf of Oman, Nancy Pelosi accusing him of a criminal cover-up, calls to fire Kellyanne Conway, Joe Biden's campaign and more in a wide-ranging phone call with 'Fox &amp; Friends.'

President Trump on Friday sought to clarify his controversial comments indicating he would take information on political rivals from foreign countries, saying on "Fox & Friends" that he could report such conversations to the FBI -- while arguing the heat should really be on Democrats for the alleged spying on his 2016 campaign.

"If I was, and of course you have to look at it because if you don't look at it you're not going to know if it's bad ... of course you give it to the FBI or report it to the attorney general or somebody like that. But of course you’d do that, you couldn't have that happen with our country," he said.

Trump had said in an interview with ABC News earlier this week that he would listen to information from foreign governments, saying that "there isn't anything wrong with listening." He also gave conflicting answers on whether he'd contact the FBI, saying at one point that he would not.

But he also noted he is in constant contact with allies, such as during his recent trip to Europe where he spoke to Queen Elizabeth II, U.K. Prime Minister Theresa May and French President Emmanuel Macron. “We have many conversations, and I'm thinking gee if they say ‘we don’t like your opponent’ am I supposed to, the president of France, am I supposed to report him to the FBI?” he asked.

Instead, he sought to bring attention back to the origins of the Russia probe, particularly the Democrat-funded anti-Trump dossier that was used by the FBI to begin surveillance on a Trump campaign aide. The Department of Justice is currently investigating its surveillance during the 2016 campaign, but Trump directly blamed the Democrats.

"Here's the bottom line: they spied on my campaign and they got caught," he said.

Saying the actions could constitute the biggest political crime in American history, he said: “They spied on the opposing party's campaign using the intelligence apparatus of the United States.”

When presented with comments by House Speaker Nancy Pelosi, D-Calif., who accused him of a "criminal coverup" in terms of his conduct during the Russia investigation, Trump said that "it's a fascist statement, it's a disgraceful statement."

In the wide-ranging interview, he also warned Iran over this week's attacks on tankers in the Gulf of Oman that the U.S. blames directly on Tehran, saying that, “We don’t take it lightly.”

“Iran did do it and you know they did it because you saw the boat,” he said, before pointing to video that showed an Iranian vessel removing an unexploded mine attached to a Japanese-owned oil tanker.

Trump said the mine had “Iran written all over it.” But he said that Iran had been damaged since he took office, but was still a threat.

"They're a nation of terror and they've changed a lot since I've been president, I can tell you."

Secretary of State Mike Pompeo on Thursday said the Iranians had launched a “blatant assault” on tankers in the gulf.

Pompeo said that Iran was working to disrupt the flow of oil through the Strait of Hormuz and this is a deliberate part of a campaign to escalate tension, adding that the U.S. would defend its forces and interests in the region.

The tensions are the latest since the U.S. announcement of its withdrawal from the 2015 Iran nuclear deal. Iran is now also threatening to withdraw from the accord and resume enriching uranium if new terms are not offered.