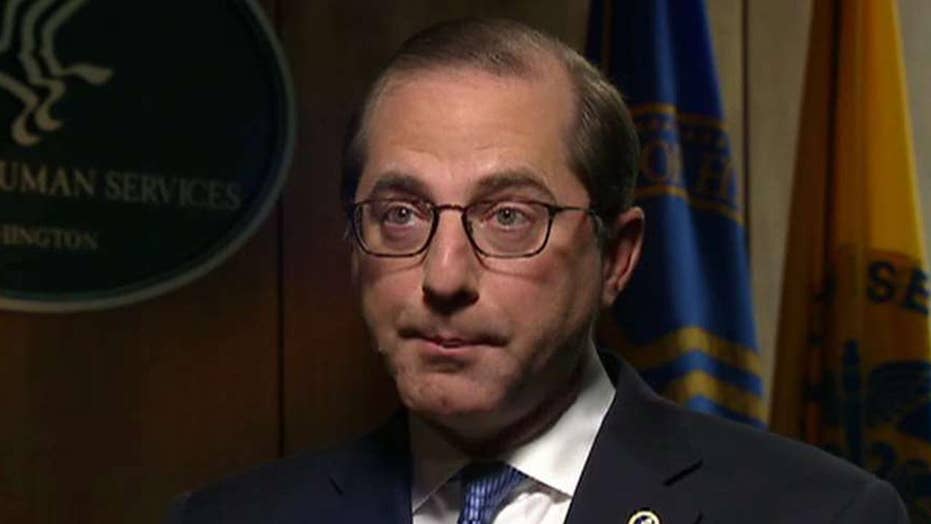 Alex Azar officially became the new secretary of the Department of Health and Human Services (HHS) in January.

Azar, who was confirmed by the Senate in a 55-43 vote that was largely along party lines and sworn in on Jan. 29, replaced Tom Price, the department's former secretary.

Price resigned in September 2017 after he was criticized for using private charter planes for official travel. President Trump later tapped Azar to take over the role.

Here’s what you need to know about Azar.

Who is Alex Azar?

Alex Azar replaced Tom Price as the secretary of the Department of Health and Human Services. ((Reuters/Joshua Roberts))

Azar, 50, Azar is married with two children. Prior to becoming the Health Department's new secretary, he lived in Indiana with his family for about a decade, according to his Health and Human Services Department biography.

Azar, who once clerked for the late Supreme Court Justice Antonin Scalia, has spent a large chunk of his career in the healthcare industry -- an industry he entered "largely by accident," he once wrote.

For a decade, Azar served as a senior executive of drugmaker Eli Lilly, which has been criticized for raising the price of insulin and other widely used medications. Though he resigned from the Indianapolis-based company last year, he built a financial portfolio that’s now worth between $9.5 million and $20.6 million, according to disclosure records filed with the Office of Government Ethics, as reported by The Associated Press.

During his time as deputy secretary, Azar "was involved in improving the department’s operations; advancing its emergency preparedness and response capabilities as well as its global health affairs activities; and helping oversee the rollout of the Medicare Part D prescription drug program," according to his Health and Human Services Department biography.

Why did Tom Price resign?

In August, he also reportedly took a government-funded private plane to St. Simons Island. Price owns land on the island, which is just off the Georgia coast. He reportedly flew there before attending a medical conference.

And during official trips to Africa, Europe and beyond, Price took a military aircraft -- a move that cost taxpayers more than $500,000, according to reports.

After Price resigned, President Trump tapped Don J. Wright as acting secretary. Wright worked as the deputy assistant secretary for health and director of the Office of Disease Prevention and Health Promotion before he became the department's acting secretary.

What does the Department of Health and Human Services do?

The trillion-dollar department also plays a major role in the economy and accounts for about one-fourth of the federal budget.