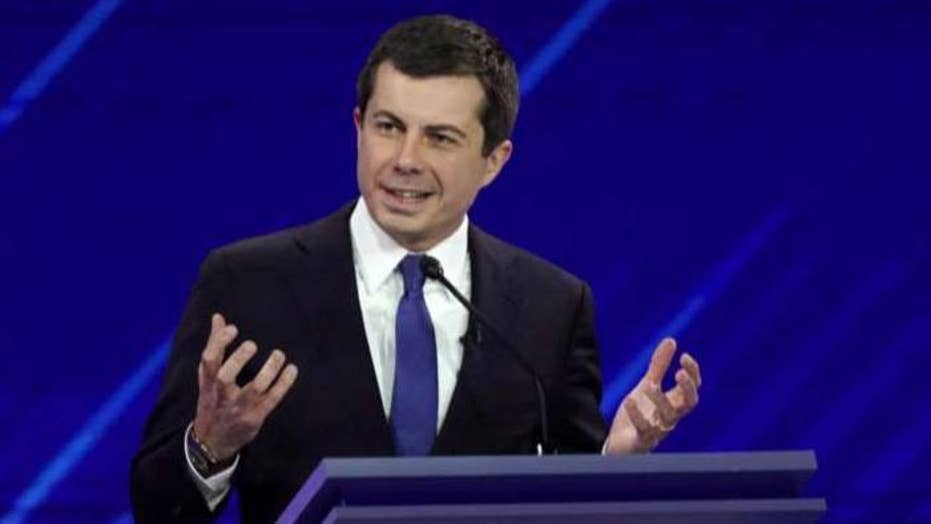 Former South Bend, Ind., Mayor Pete Buttigieg has gone from being relatively unknown on the national political stage to one of the top contenders for the Democratic presidential nomination since jumping into the race last April.

A graduate of Harvard and Oxford, Buttigieg worked with the major consulting firm McKinsey & Company before being elected South Bend's mayor in 2011. Three years later, he deployed to Afghanistan for seven months with the U.S. Navy Reserves. Buttigieg, would be the first openly gay president, also unsuccessfully ran for chairman of the Democratic National Committee in 2017.

Here's where the 38-year-old stands on some of the issues that matter most to voters.

In contrast with some other candidates whose health care plans involve the abolition of private insurance in favor of a single-payer system based on "Medicare-for-All," Buttigieg takes a more moderate approach that reflects the "public option" former President Barack Obama originally pushed before the passage of the Affordable Care Act.

Dubbed "Medicare-for-all who want it," Buttigieg's plan would offer a government-run choice for consumers while using price controls to keep the costs of private plans down.

"If private insurers are unable or unwilling to offer better plans than they do today, competition from this public alternative will naturally lead to Medicare-for-all," he said of the plan, indicating he would not be averse to a universal health care system but does not want immediate wholesale change like that favored by Sen. Elizabeth Warren, D-Mass., and Sen. Bernie Sanders, I-Vt.

Illegal immigrants would be able to participate in the former mayor's public option and receive other government health benefits, which is a position that's in line with most of the primary field.

While he didn't have the chance to co-sponsor the measure because he was not a member of Congress, Buttigieg has publicly backed the Green New Deal resolution introduced last year by Rep. Alexandria Ocasio-Cortez, D-N.Y.

The 38-year-old also has the same goal as many of his rivals on when the United States should aim to reach net-zero carbon emissions: 2050.

Buttigieg's climate plan, however, is not as ambitious as the packages some of the more progressive candidates propose. His campaign has said he would spend $1.5 trillion to $2 trillion fighting climate change, according to numbers released in September.

Buttigieg also breaks from the progressives in the race by opposing a ban on fracking, a controversial method of extracting natural gas from underground. He holds the same position as Biden on the issue.

In a primary filled with candidates eager to soak the rich and tax large corporations, Buttigieg has not come out with a specific plan on corporate taxes. While many of his fellow candidates have said they would roll back the 2017 Trump tax cuts and return the corporate income tax rate to 35 percent, the former mayor has talked more generally about closing loopholes.

"Everything that we have proposed has been paid for, and we have proposed no tax increase on the middle class," he told ABC's Stephanopoulos in November. "We don’t have to do it in order to deliver these health care solutions. There is a lot of money on the table from loopholes in the corporate tax system from the wealthiest among us who could and should pay more."

Buttigieg agrees with the more progressive candidates, though, that the government should levy the accrued wealth of the richest people in America. He pitched the idea for a "reasonable" wealth tax at a Fox News town hall event in New Hampshire last year.

He also backs a $15 minimum wage, which is a relatively universal position among Democrats at this point.

Buttigieg has been critical of Trump's stances on immigration, including the border wall, as has much of the 2020 primary field.

On his website, Buttigieg says he would reform Customs and Border Protection and Immigration and Customs Enforcement, two agencies charged with carrying out U.S. immigration policy, and open America's doors to refugees.

Buttigieg has also publicly said he would decriminalize border crossings, a stance that puts him at odds with fellow moderate Joe Biden. Like the rest of the Democratic primary field, though, the former mayor supports a pathway to citizenship for those already in the U.S. illegally.

Buttigieg would federally legalize marijuana if elected, a stance taken by most of the Democratic field -- but he would decriminalize drug possession in general, too. He's also backed medical marijuana, at one point last year criticizing Iowa Gov. Kim Reynolds for vetoing a bill to expand the state's medical marijuana program.

Additionally, the candidate insinuated that using federal resources to go after cannabis-related crimes is a waste of taxpayer money.

"American cities face urgent issues around gun violence and police-community relationships. Could DOJ maybe go back to helping us with those instead of going after legalized pot?" he tweeted in 2018.

Outside of drug policy, Buttigieg agrees with most Democrats that the death penalty should be abolished. The Trump administration has moved to resume federal executions despite legal hurdles.

The former mayor also holds the popular Democratic position that felons who have been released from prison should see their voting rights restored. That stance is more moderate than those of his opponents Warren and Sanders, however, who have both entertained the idea of allowing felons to vote from behind bars.