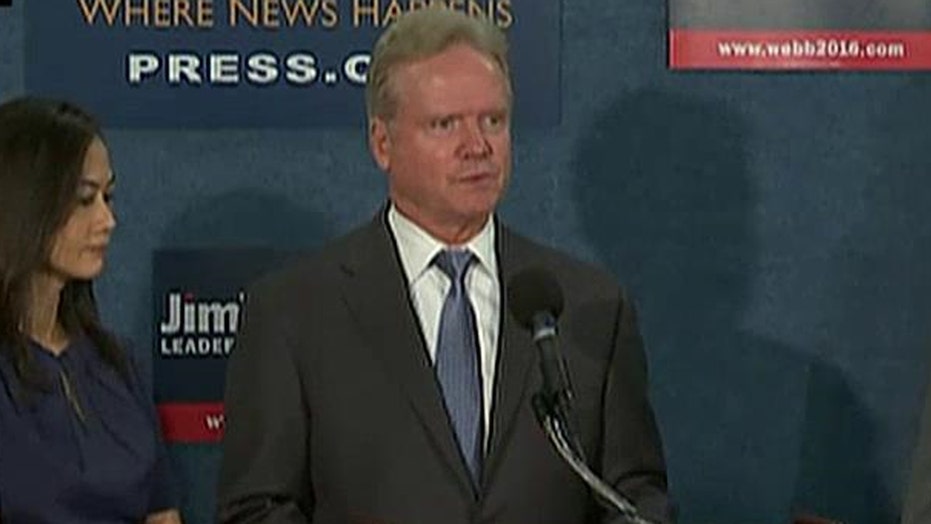 Jim Webb drops out of Democratic race for the White House

Webb reportedly mulling a run as an independent

Former Virginia Sen. Jim Webb dropped out of the Democratic presidential race on Tuesday, ripping both major parties for "being pulled to the extremes" while suggesting he may consider an independent bid.

The decision comes after the ex-senator and former Navy secretary struggled to gain traction in a race dominated by Hillary Clinton, and to an extent Sen. Bernie Sanders.

In a press conference Tuesday afternoon, Webb said political candidates are "increasingly out of step with the people they're supposed to serve," claiming Americans also are increasingly independent -- and uncomfortable with "the extremes."

"For this reason, I'm withdrawing from any consideration of being the Democratic Party's nominee for the presidency," Webb said.

He added, "How I remain as a voice will depend on what kind of support I'm shown in the coming weeks."

Webb has been averaging just over 1 percent in national polls, according to RealClearPolitics, and had only built a relatively small campaign.

A one-time member of President Ronald Reagan's administration, Webb repeatedly complained during the first Democratic debate last week that he was given little time to answer questions compared with other candidates. He said last Thursday he felt the debate had been "rigged in terms of who was going to get the time on the floor."

But Webb also made clear Tuesday he's become disillusioned with both parties, with the campaign finance system and particularly with the Democratic Party leadership.

While Webb is weighing a possible independent bid, he's expected to take some time after Tuesday's announcement to talk with people from across the political spectrum before making a decision.

Webb has raised only about $700,000 and ended the month of September with more than $300,000 in the bank. Rivals like Clinton and Sanders have raised millions for the campaign.

But asked Tuesday about the possibility of mounting an independent run, the former senator claimed he would have significant financial backing if he did.

"I'm thinking about all my options," Webb said.

Webb would not say Tuesday whether he still describes himself as a Democrat.

Asked at last week's debate whether he's out of step with the modern Democratic Party, Webb said he wasn't.

"Actually I believe that I am where the Democratic Party traditionally has been," he said last week. "The Democratic Party, and the reason I've decided to run as a Democrat, has been the party that gives people who otherwise have no voice in the corridors of power a voice."

Webb surprised many fellow Democrats when he became the first major figure in the party to form a presidential exploratory committee in November. But in a sign of Webb's impending decision, the Iowa Democratic Party said he would not appear at Saturday's major Jefferson-Jackson fundraiser in Des Moines.

Webb, 69, a decorated veteran of the Vietnam War, has promoted criminal justice reform and an overhaul of the campaign finance system and has been critical of the Obama administration's foreign policy. He has urged Democrats to appeal to working-class Americans and white voters in the South who have left the Democratic party in recent elections.

Webb was a Navy secretary under Republican President Ronald Reagan and an author who became a Democrat in response to the Iraq war, which he opposed.

In the Senate, Webb focused on foreign affairs and veterans issues and was the driving force behind a GI Bill for post-9/11 veterans seeking to attend college after returning from Iraq or Afghanistan. He announced he would not seek re-election in 2012 and returned to writing.