"I come to the U.N. not only as the president's emissary but as a voice of America's unwavering commitment to democracy, freedom, human rights and, whenever possible, the peaceful resolution of conflicts,” she told reporters outside of the council chamber.

SENATE CONFIRMS KELLY CRAFT AS US AMBASSADOR TO UN

“In a world marked by humanitarian crises and geopolitical challenges, strong American leadership is absolutely critical and I intend to provide it,” she said.

Craft, a former U.S. ambassador to Canada, was confirmed by the Senate in July and arrived in New York to present her credentials to U.N. Secretary-General Antonio Guterres. Moments later, she took part in a series of votes on a range of matters from Libya to the Central African Republic.

She was greeted warmly by all members of the council. U.K. Ambassador Karen Pierce told reporters they had spoken briefly “to say hello and how nice it was to have her with us, which is fantastic.”

Russian Ambassador Vassily Nebenzia, with whom Craft is likely to clash on numerous issues, started their relationship by saying her appointment was “long-awaited” and he looks forward to a “fruitful and constructive and lengthy cooperation.” 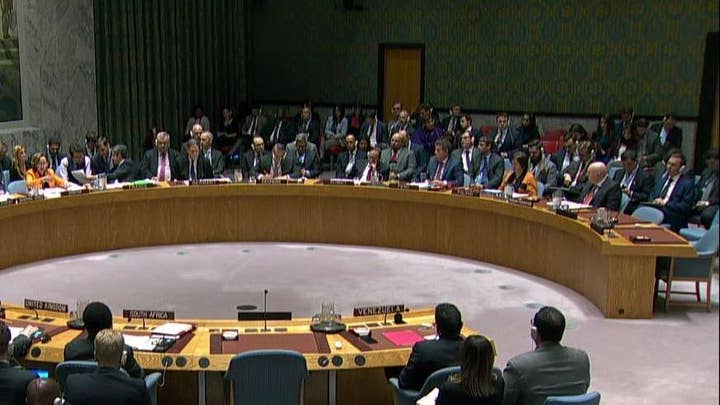 Craft, who is not as immediately well-known as Haley, will be closely watched for the extent to which she continues the combative approach of her predecessor.

The Trump administration has taken a skeptical stance toward U.N. operations. While the U.S. succeeded in getting a series of sanctions imposed on North Korea and South Sudan, it has pulled out of the Iran nuclear deal and the Paris climate deal -- in which the U.N. played key roles.

It has also cut funding for the U.N. Palestinian agency; pulled out of the scandal-ridden U.N. Human Rights Council and the U.N. Educational, Scientific and Cultural Organization (UNESCO), as well as a U.N. arms trade treaty; and challenged what it asserts is the anti-American and anti-Israel bias at the body. Craft is expected to continue that stance.

Craft will be watched closely too for her positions on energy and climate change. The U.N. has become increasingly focused on climate change in recent years, and Guterres has made the Sustainable Development Goals a cornerstone of his time as head of the U.N.

During the confirmation process, Democrats raised concerns about her past remarks about climate change. Her husband, Joe Craft, is a coal executive and the couple has investments in the energy industry. She has said she would recuse herself if ever a matter came up where she had a direct financial interest.

It will also remain to be seen to what extent Craft has the same level of independence as Haley, who stepped down in December. Unlike Haley’s, Craft’s position is not at Cabinet level. While it was a Cabinet-level position under former President Barack Obama and the first few years of Trump’s administration, some experts say the position should not come with a seat at Cabinet.

“By making the United Nations ambassador a cabinet member, a president signals the U.N. is an important component of America’s foreign policy,” U.N.-based columnist Benny Avni told Fox News. “It shouldn’t be. U.N. ambassadors should have the same rank as other U.S. envoys around the world.”

"[Former U.N. Ambassador] John Bolton used to say his job was to promote America’s interests at the U.N., not promote the U.N. in America," he said. "Too often ambassadors who are also Cabinet members do the latter."

CHINESE INFLUENCE SURGES AT UN, AS US WARNS OF 'CONCERTED PUSH' TO ADVANCE AGENDA

However, amid a rising Chinese influence at the U.N., Craft's installation is likely to help the U.S. better discover its voice at the U.N. Jonathan Wachtel, a former U.S. Mission spokesman under Haley, told Fox News that getting Craft into the position formally is essential for U.S. goals at the U.N.

“It is critical to have full representation in the Security Council and General Assembly to maximize our impact on how best to resolve crises and other major decisions – ending wars, ensuring effective peacekeeping missions, containing rogue nations seeking weapons of mass destruction, maintaining regional stability, delivering humanitarian assistance, treaties, and so much more – that affect Americans, our allies and people around the globe,” he said.

He said that while Deputy Representative Jonathan Cohen “stepped up and worked long hours” during the interim period, Craft’s participation is “not just welcome but essential.

"She, like her predecessors, faces many complicated and intense days ahead as she navigates through the complexity of UN affairs and tries to apply common sense to as many of the world's problems as she can,” he said.

Craft’s entrance to the U.N. comes after the departure from the White House of Bolton as national security adviser. But even with Bolton’s departure, there are plenty of U.N. skeptics left in the administration.

Secretary of State Mike Pompeo has expressed his concerns about the U.N. while Trump once dismissed the U.N. as “a club for people to get together, talk and have a good time.”