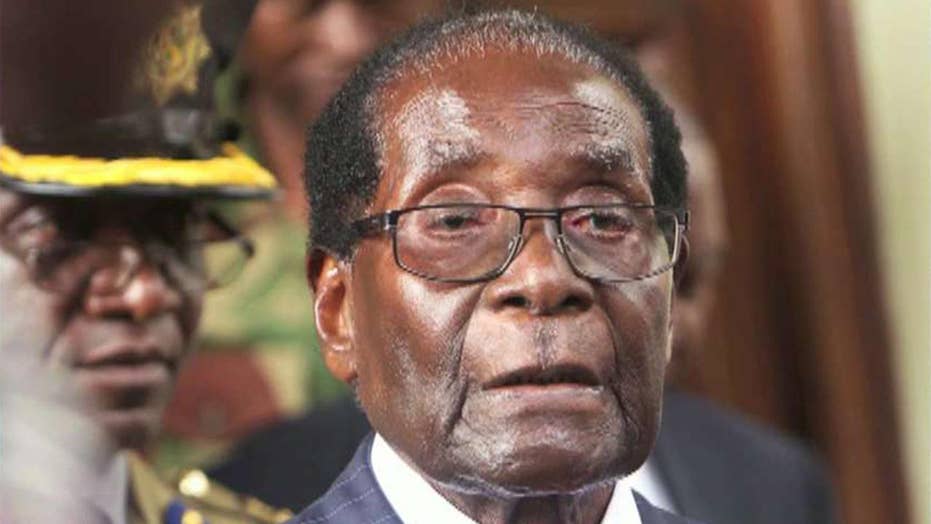 The U.S. Embassy to Zimbabwe 'extends its condolences' to the Mugabe family and the people of Zimbabwe following the former dictator's death.

Mugabe died Friday at age 95, two years after he was forced to resign after decades in power.

“The United States extends its condolences to the Mugabe family and the people of Zimbabwe as they mourn the passing of former President Robert Mugabe,” the since-deleted tweet read. “We join the world in reflecting on his legacy in securing Zimbabwe’s independence.”

Fox News’ Tucker Carlson called the tweet an example of the executive branch being “completely out of control.”

“Apparently the US Ambassador to Zimbabwe signed off on it," Carlson said Friday on "Tucker Carlson Tonight." "He should be recalled for that… This is when you know the executive branch of government is completely out of control. That it’s being run by bureaucrats who don’t care at all who was elected, who are acting out their left-wing agendas without any restraint.

“Because Robert Mugabe was such a bad leader that no normal person would look at him and say we need to mourn his passing," Carlson continued."Not one person. The only words in response to his death would be ‘good riddance.'"

Pundits on the left and right questioned the Embassy’s judgment after the tweet:

Mugabe was instrumental in freeing Zimbabwe from U.K. rule and was seen as a giant in the African liberation struggle. However, his 37-year rule was plagued by corruption and violence. He was accused of setting death squads on supporters of the opposition, of election rigging and causing financial ruin after he was sanctioned by the United Nations for his human rights abuses.

Mugabe said he wanted to rule for life. However, he was forced to resign amid pressure from the military, his party and the public in November 2017.

The State Department issued a more guarded response after they deleted the tweet. "We extend our condolences to those mourning the loss of former Zimbabwean President Robert Mugabe," the statement read. "Robert Mugabe helped liberate Zimbabwe, but his human rights abuses and gross economic mismanagment impoverished millions and betrayed his people's hopes for their nation."