President Trump is scheduled to deliver the commencement address Saturday at the U.S. Military Academy – and it’s expected to be unlike any commencement held in recent memory at West Point, N.Y.

That’s because numerous precautions are being made to prevent the spread of the coronavirus.

For one thing, the event won’t be held at 38,000-seat Michie Stadium, where the academy’s football team plays. Instead, it will be held on the Parade Field, an open area surrounded by statues of legendary U.S. Army generals, such as Washington, Eisenhower, MacArthur and Patton.

For another, family members of the cadets will be watching via livestream. They won’t be there in person to watch their loved ones graduate.

President Donald Trump walks onto the field ahead of an NCAA college football game between Army and Navy, Saturday, Dec. 14, 2019, in Philadelphia. (Associated Press)

“This is a real unique year. It really is,” Sherman Fleek, the West Point Command historian, told lohud.com. “I've already been asked, ‘Is this the most unusual year for disruption and events?’ And I said, ‘Fifty years from now, they'll make a determination. You just can't say this is it.’”

The 1,100 cadets in attendance also will be seated six feet apart, in keeping with medical officials’ advice regarding social distancing. There will also be no handshaking, lohud.com reported.

And the swearing-in of the cadets as second lieutenants – which normally occurs after the ceremony – has instead already happened, on May 23 via computer, the outlet reported. 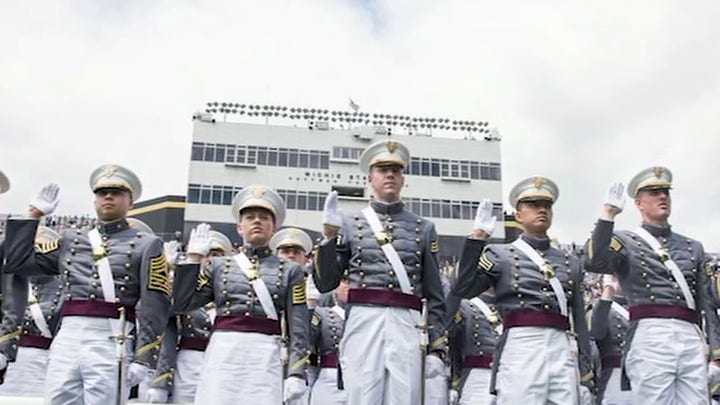 After some initial concern that the event might be canceled because of the virus, academy officials announced in April that they would proceed “after careful consideration of the steps the Army can take to mitigate risk,” Army Secretary Ryan McCarthy said at the time.

When President Trump initially disclosed his plans to speak at West Point, the date was set for May 23 but was subsequently changed to Saturday amid the disruptions caused by the coronavirus.

The president expressed some disappointment at the time that the ceremony would be altered from previous years.

“They’ll have some big distance, so it will be very different than it ever looked,” the president said, according to The Hill. “Do I like the look? No, I don’t. And eventually, next year, they’ll have a commencement like it’s been.”

Taft was secretary of war at the time of his speech; Eisenhower also spoke there while chief of staff; and George H.W. Bush previously spoke there twice as vice president.