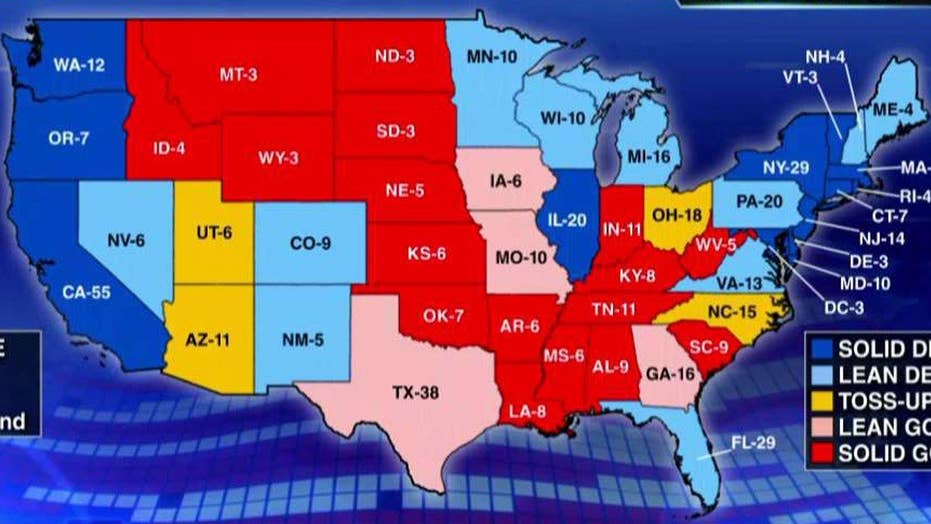 Latest Fox News scorecard not a pretty picture for Trump

Projections have Clinton winning 307 electoral votes, while Trump is set to get 181

Donald Trump’s path to the presidency has narrowed considerably in recent weeks amid campaign trail controversies, with the latest Fox News electoral ratings showing reliably red states coming into play – a trend that only ups the pressure on the Republican nominee to tilt the race at the third and final presidential debate Wednesday night.

The debate in Las Vegas, moderated by Fox News’ Chris Wallace, will mark the last face-off between Trump and Democratic nominee Hillary Clinton in the home-stretch of the presidential campaign.

Both candidates are dealing with their share of controversies – Trump, facing multiple allegations of groping dating back decades; and Clinton, grappling with embarrassing revelations from leaked emails and now the allegation in an FBI file that a top State Department official offered a “quid pro quo” with the bureau to alter a Clinton server email’s classification.

Trump has seized on the latter revelation in the run-up to the debate. But so far, his poll numbers have taken a bigger hit than hers – and the latest Fox News Electoral Scorecard reflects this.

In a significant shift, the scorecard shows the rating for Texas being changed from “solid Republican” to “lean Republican.”

Trump still appears to have the advantage but his lead over Clinton is now in the single digits in recent state polls – in a state that hasn’t voted Democrat in the White House race since 1976.

"The combination of the slow march of demographic change and Trump's rhetoric appears to have made Texas' registered voter pool more Democratic than we have seen in previous presidential races," Joshua Blank, the Texas Lyceum's research director, told The Dallas Morning News.

In another poll released Tuesday from the University of Houston, Clinton has pulled within 3 percentage points of Trump in the traditionally Republican stronghold. It’s a stark difference from the 2012 race where GOP nominee Mitt Romney took the state by 16 points. Arizona Sen. John McCain led Barack Obama there by 12 points in 2008.

Clinton’s campaign, sensing an opening, has even gone on air in Texas with a one-week ad buy in Dallas, Houston, Austin and San Antonio. The ad highlights an endorsement from The Dallas Morning News – the first time the conservative-leaning newspaper has backed a Democrat for president since 1940.

Nearly every major newspaper has backed the Democrat, though, just one factor fueling Trump’s claims that the media are helping “rig” the election against him. Trump also says the allegations by numerous women against him are false and the media are only feeding the allegedly erroneous claims.

In a potential hint at the candidate’s debate strategy, the Trump campaign came out with a new ad overnight suggesting Clinton helped “special interests” during her time in Washington.

“Hillary Clinton wants you to believe that behind the fog of scandal that shrouds her political career you find results, where in reality all you find is a trail of destruction that has damaged our economy and put American lives at risk,” spokesman Jason Miller said in a statement.

To watch the debate, tune in at 9 p.m. to Fox News Channel.

The debate also will be streamed on FoxNews.com and the Fox News app.

The electoral map, though, is looking dicier than ever for Trump.

According to the latest Fox News ratings, if Clinton won all the “solid” and “lean” Democrat states, she’d have 307 electoral votes – well over the 270 needed to win.

If Trump won all the “solid” and “lean” Republican states, he’d have just 181 electoral votes. That means even if he won all the pure “toss-up” states – Arizona, North Carolina, Ohio and Utah – and their 50 electoral votes, he’d still be short of 270.  He’d have to flip some states currently leaning Democrat back into his column.

That Utah is now in the “toss-up” column represents another shift, and another headache for Trump. The Fox News Electoral Scorecard recently shifted Utah from “solid Republican” to “toss-up.” The New York billionaire no longer has the clear advantage in the state, and is statistically tied in some polls with Clinton and Evan McMullin, an independent candidate who is pitching himself as the conservative alternative to Trump.

A poll of likely voters, conducted over the weekend by Rasmussen Reports, shows that 2 points separate the three candidates. For both Clinton and McMullin, it is their best showing in the state in any major poll thus far, and could reflect lost support for Trump among the state’s sizable Mormon population.

Following the release of Trump’s infamous 2005 “Access Hollywood” tape, a number of top Republicans in the state swiftly pulled their endorsements, including Gov. Gary Herbert who called Trump’s comments “beyond offensive and despicable.”

Republican Rep. Jason Chaffetz, who is a Mormon, said if he voted for Trump he would not be able to look his young daughter in the eye.

Chris Karpowitz, director of Brigham Young University’s Center for the Study of Elections and Democracy, told The New York Times that “the Republican establishment in the state of Utah is in all-out revolt again the Trump candidacy.”

The pressure now is on Trump to not only win the toss-up states and turn blue-ish states red, but to prevent states like Utah and Texas from abandoning the Republican ticket for the first time in years.

Even Alaska, which is still rated “solid Republican” in the Fox News scorecard, has seen Clinton gaining on Trump in recent polling. The last time Alaska, one of the country’s deepest-red states, voted Democrat was in 1964.

“I think the polls are as accurate here as they were in Great Britain,” Gingrich quipped.