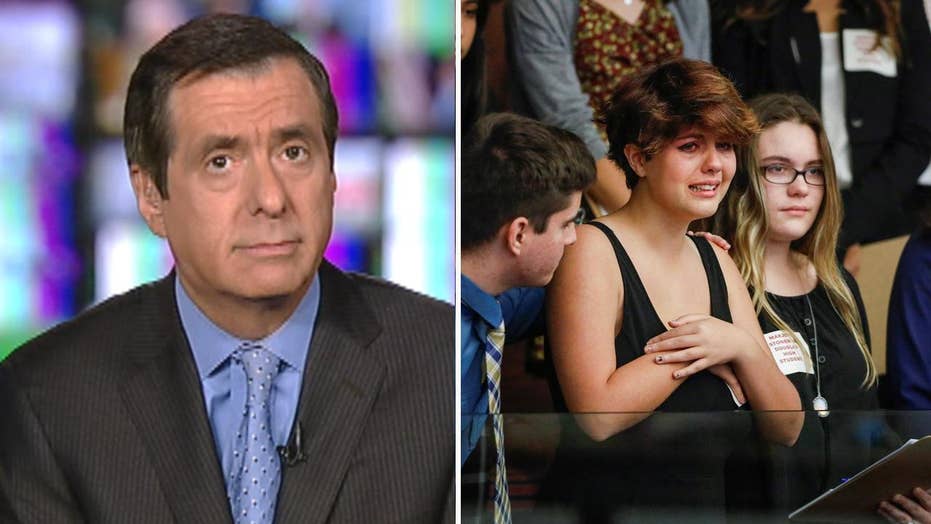 'MediaBuzz' host Howard Kurtz weighs in on the growing media and political shifts over gun control as Parkland, Florida shooting survivors are speaking out.

Donald Trump could be the president who pushes Congress to do something about gun control, even if those steps are modest.

Perhaps only a Republican president—and one elected with the full backing of the NRA—would be positioned to take such steps.

But rather than welcoming Trump's move in their direction, gun control advocates are initially dismissing his efforts as inadequate.

For a quarter century, virtually any effort at regulating the sale of guns has fallen victim to Washington gridlock. Ever since Congress let Bill Clinton’s assault-weapon ban expire in the 1990s, the issue has been seen as politically radioactive, not just by Republicans but by moderate Democrats as well.

Even after the school shooting in Newtown, even with Barack Obama and Joe Biden mounting a sustained push for some gun-control measures, Congress did nothing. There was no way the Republicans were going to give Obama even a minor concession on the issue.

Then came last year's Las Vegas massacre, and an outcry over the shooter's use of bump stocks to boost the speed of his attack. But nothing happened.

And yet the Florida school shooting, and the gruesome spectacle of children being gunned down, seems to have brought the issue to a potential tipping point.

When the conservative, pro-Trump New York Post is running such banner headlines as "MR. PRESIDENT, PLEASE ACT" and yesterday’s "HOPE FOR GUN CONTROL"—with a photo of protesting Florida students--it's clear that the national mood is changing.

Even Pat Robertson, the onetime GOP presidential candidate, said on his "700 Club": "I am a gun owner. I have hunted. I have shot skeet," Robertson said. "But for heaven's sakes, I don't think that the general population needs to have automatic weapons."

Trump has ordered the Justice Department to speed up an existing review and issue regulations banning bump stocks. He has also signaled he is open to arguments about tighter background checks and raising the age limit for purchases of such weapons as an AR-15 rifle, the one used in Parkland.

This comes from a president who embraced the Second Amendment during the campaign and said of the group that backed him financially: "To the NRA, I can proudly say I will never, ever let you down."

Of course, after yesterday's gut-wrenching session with students, teachers and parents who went through mass shootings, Trump also said that arming people in schools could be part of the solution--an approach favored by the NRA.

There is a partisan divide, with only 34 percent of Republicans supporting stricter gun laws, but 43 percent back an assault weapons ban.

Washington's paralysis on these issues speaks to more than the clout of the NRA. Many lawmakers are just afraid of alienating gun owners, who are passionate and highly motivated voters.

Now it's true the NRA doesn't oppose some of these measures, such as regulating bump stocks (though it doesn't want legislative action on the matter).

But Trump does have a Nixon-goes-to-China opportunity here. He could detoxify the issue for many Republicans, bringing enough along to join with liberal Democrats in passing modest legislation.

It's just as possible that, like immigration, this issue will become embroiled in partisanship and the moment will pass.

Trump has already remade the Republican Party in his image, drawing considerable criticism from those who don't like him or his policies. But what if, in the wake of the Florida tragedy, he moved the party toward a more centrist and popular position?