President Trump says he will not attend Joe Biden's inauguration

Vice President Mike Pence is expected to attend, according to reports; John Roberts reports to the White House.

President Trump said Friday he "will not be going" to the inauguration of President-elect Joe Biden -- an extraordinary move that will make him the first to skip the inaugural ceremony of his successor since 1869.

"To all of those who have asked, I will not be going to the Inauguration on January 20th," the president tweeted.

Trump will be the fourth president to not attend his successor's Inauguration Day. Former presidents John Adams, John Quincy Adams and Andrew Johnson did not attend their successors' inaugural ceremonies.

On Thursday night, the president – who failed in various legal challenges since Election Day – acknowledged that "a new administration" would be inaugurated Jan. 20.

"My focus now turns to ensuring a smooth, orderly and seamless transition," Trump said. "This moment now calls for healing and reconciliation."

Trump’s announcement came just days after he spoke at a rally Wednesday, telling supporters that he would "never concede" and repeated unsubstantiated claims that the election was "stolen" from him and that he won in a "landslide."

TRUMP SAYS HIS SUPPORTERS WILL STILL HAVE A 'GIANT VOICE,' AND WON'T BE 'DISRESPECTED'

During his remarks, he renewed pressure on Vice President Mike Pence, claiming he should decertify the results of the presidential election and send it "back to the states" and that if he did, Trump would be president for another four years.

Trump’s remarks earlier this week came ahead of a joint session of Congress to certify the results of the presidential election. 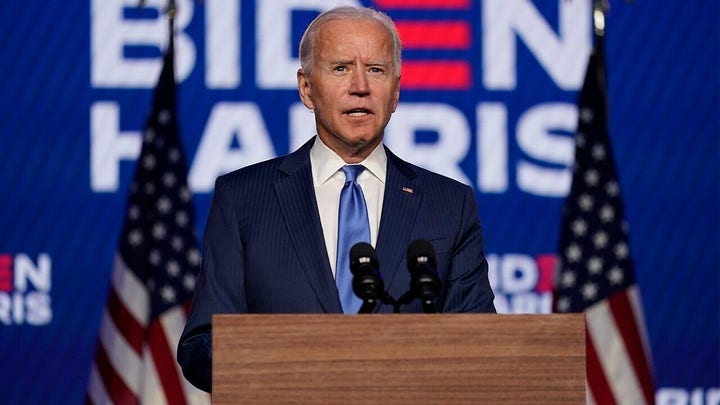 As members of the House and Senate raised objections to certain electoral votes, both chambers called for a recess and left their chambers as pro-Trump protesters stormed the Capitol Building, sending it into lockdown for hours.

Washington, D.C., police said the riot at the Capitol resulted in five deaths -- including a Capitol Police officer and a woman who had been shot inside the building -- and at least 70 arrests.

The president, during the raid inside the Capitol, tweeted a taped video to supporters, telling them to "go home" while maintaining that he had the 2020 presidential election "stolen" from him.

In the president's video, addressing supporters, he said: "I know your pain, I know your hurt."

"We had an election that was stolen from us," Trump said in the video, taped from the White House. "It was a landslide election and everyone knows it, especially the other side."

"This was a fraudulent election, but we can’t play into the hands of these people," Trump said. "We have to have peace." State and local election officials say they have not found evidence of widespread voter fraud that would have changed the results of the election.

Trump added: "So go home, we love you, you're very special, you’ve seen what happens, you’ve seen the way others are treated that are so bad, so evil. I know how you feel."

"But go home and go home in peace," he said.

The president, after posting the video, tweeted: "These are the things and events that happen when a sacred landslide election victory is so unceremoniously & viciously stripped away from great patriots who have been badly & unfairly treated for so long," Trump tweeted. "Go home with love & peace."

He added: "Remember this day forever!"

SCHUMER: USE 25TH AMENDMENT OR IMPEACHMENT TO REMOVE TRUMP FROM OFFICE

Republicans and Democrats alike slammed the president for not condemning the violence, resulting in a number of departures of high-profile administration officials -- including Transportation Secretary Elaine Chao and Education Secretary Betsy DeVos, who said the president’s "rhetoric" incited the unrest. 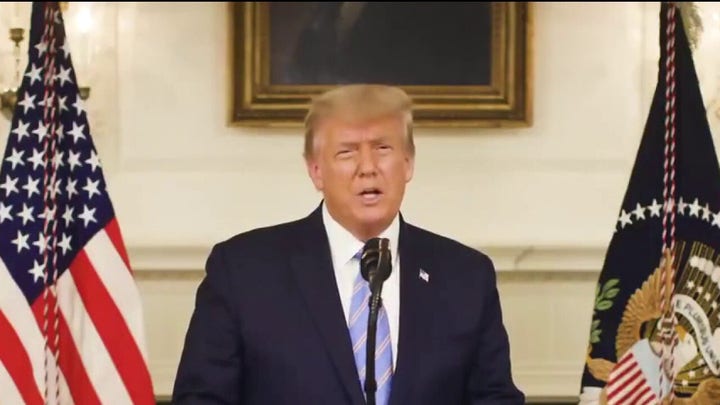 The president, on Thursday night, posted another video, after being blocked from Twitter and Facebook for violating their policies with his previous posts, condemning the "heinous attack" on the Capitol by his supporters and called for healing.

But Friday morning, the president tweeted: "The 75,000,000 great American Patriots who voted for me, AMERICA FIRST, and MAKE AMERICA GREAT AGAIN, will have a GIANT VOICE long into the future."

"They will not be disrespected or treated unfairly in any way, shape or form!!!" he added.

Meanwhile, Democrats and some Republicans have called for Pence to invoke the 25th Amendment to remove the president from office — just days before Biden’s inauguration, saying that if Pence and the Cabinet fail to act, Congress should introduce articles of impeachment again.