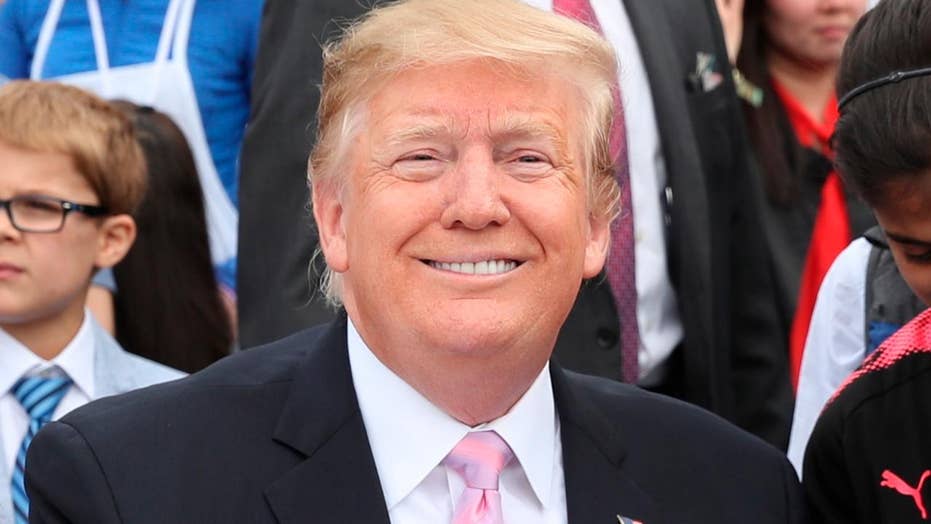 Raw video: President Trump tells a child the border wall is 'being built now' while signing cards at the annual Easter Egg Roll event at the White House.

President Trump on Wednesday warned Mexico after their soldiers reportedly drew guns on U.S. troops at the border last week, while also calling on America's southern neighbor to do more to halt another north-bound migrant caravan.

“Mexico’s Soldiers recently pulled guns on our National Guard Soldiers, probably as a diversionary tactic for drug smugglers on the Border. Better not happen again! We are now sending ARMED SOLDIERS to the Border. Mexico is not doing nearly enough in apprehending & returning!” he tweeted.

TRUMP TELLS CHILD AT EASTER EGG ROLL:  'THE WALL IS BEING BUILT NOW'

The president of the National Border Patrol Council, Brandon Judd, said over the weekend that “these things don’t just happen by accident.”

Trump also warned Wednesday of a “very big” caravan and threatened, once again, to close part of the southern border.

“A very big Caravan of over 20,000 people started up through Mexico. It has been reduced in size by Mexico but is still coming. Mexico must apprehend the remainder or we will be forced to close that section of the Border & call up the Military. The Coyotes & Cartels have weapons!” the president tweeted early Wednesday.

Mexican immigration authorities are attempting to detain individuals who are part of the large caravan currently migrating north. On Monday, Mexican officials said 371 people were detained, in what was their largest single raid thus far on a migrant caravan since the groups started moving through the country last year.

Mexican President Andrés Manuel López Obrador said the government is not letting migrants go wherever they please, but said that controls are for migrants’ security because human traffickers are allegedly infiltrated among the caravans.

“We don’t want for them to just have free passage, not just out of legal concerns but for questions of safety,” he said.

According to Mexican immigration authorities, Mexico has deported 11,800 migrants so far this month and is being more selective in who is given a visa, which allows a migrant to remain in the country and work.

VICE PRESIDENT PENCE: CONGRESS MUST ACT TO END THE CRISIS ON OUR BORDER

Trump has threatened for months to close the border if Mexico does not stop the flows of migrants, and if Congress does not act to end what he calls “loopholes” in immigration law that allow detained migrants to be released into the U.S. until a scheduled court date.

Earlier this month, Trump visited the border amid an escalating immigration crisis, lamenting that “our country is full” and warning potential migrants thinking about crossing into the U.S. that this country “can’t take you anymore.”

The president has warned of a full-fledged crisis at the border for months. This week, Customs and Border Protection (CBP) announced the total apprehensions at the border for 2019 surpassed the total apprehensions for 2018. CBP said that as of last week, Border Patrol had apprehended more than 418,000 migrants since the beginning of fiscal 2019. Along the southwest border, there have been more than 414,000 apprehensions so far this year, compared with 396,579 last fiscal year.

The border crisis comes amid a massive shakeup at the Department of Homeland Security. Earlier this month, DHS Secretary Kirstjen Nielsen resigned. The president appointed then-CBP Commissioner Kevin McAleenan to replace her as acting secretary.