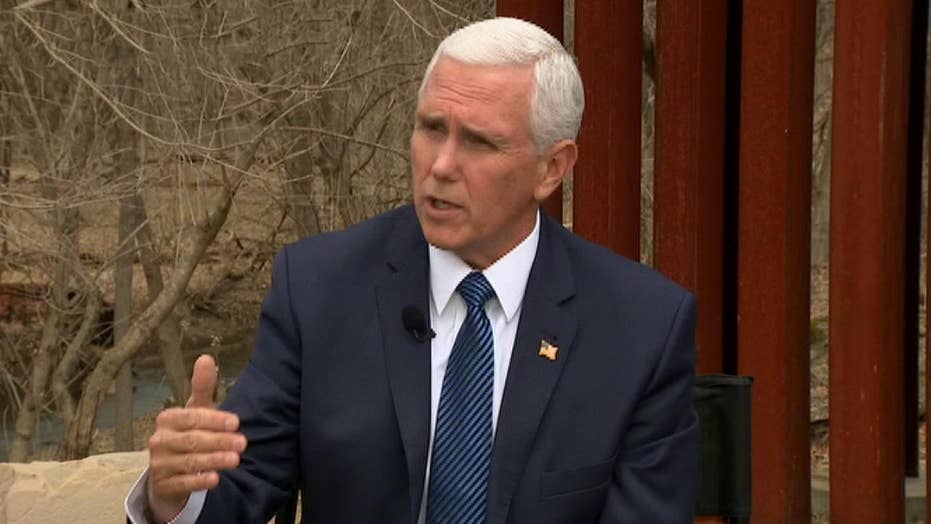 Vice President Pence: Stand with the president and stand for border security

Vice President Mike Pence talks to Pete Hegseth on 'Fox and Friends.' See the full interview at 6AM on March 14th, only on Fox News.

This week, Mayor Douglas Nicholls of Yuma, Arizona, declared a state of emergency as thousands of illegal immigrants poured into the city and pushed it to its breaking point. As the mayor warned, the sudden influx of people is “above our capacity as a community to sustain.”

I saw firsthand the humanitarian and national security emergency that we face on our southern border last week, while meeting with the men and women of Customs and Border Protection in Nogales, Arizona. As those brave officers told me, we have a real crisis on our hands, and what’s driving it is the loopholes in our immigration laws that Congress has refused to close.

This crisis is unlike anything we’ve ever seen before. Nearly 3,000 aliens are stopped trying to cross our southern border each day. In the last six months alone, Customs and Border Protection has apprehended more than 360,000 aliens – close to the total number apprehended in all of fiscal year 2018.

For the first time ever, a majority of these immigrants are families and unaccompanied minors. And their numbers are only growing, as we’ve seen a 370 percent increase in the number of family units apprehended at the border this fiscal year to date.

These vulnerable people face incredible danger from the criminal smugglers who ferry them to our southern border. Nearly 70 percent of illegal immigrants report being victims of violence, and Doctors Without Borders reports that nearly one-third of women are sexually assaulted.

But this humanitarian crisis is also endangering our national security.

Forty percent of Border Patrol agents have been diverted from guarding our borders to care for these families and children, leaving many areas along the border exposed. Drug cartels take advantage of these vulnerabilities to smuggle in their poison, fueling an overdose epidemic that took more than 70,000 American lives in 2017. And as Border Patrol agents in Nogales told me, in addition to stopping gang members, human traffickers, and other violent criminals, they apprehended two Iranian nationals attempting to cross our border illegally just two weeks ago.

This crisis is threatening lives on both sides of the border – and to end it, Congress must act to close the loopholes that drug cartels and human traffickers use to entice vulnerable families to make the long and dangerous journey north to our southern border.

That begins with changing the federal asylum laws that encourage so many immigrants to try to cross our border illegally. Our asylum system was created after World War II to protect all those who feared persecution by their home countries – but today, tens of thousands of aliens are taking advantage of the law by presenting themselves to law enforcement and claiming a “credible fear” of persecution without evidence of a credible threat.

In fiscal year 2018, more than 90,000 aliens claimed to have a credible fear after being stopped at our border – a 2,000 percent increase from just a decade before. Nearly 90 percent of them were simply released into our country to wait for a court date. Yet ultimately less than one out of ten illegal immigrants from Central America claiming credible fear receive asylum.

Every month this year, nearly 1,500 removal orders were issued after an illegal immigrant claiming a credible fear didn’t show up to court – three times the average from just three years ago. And today, more than one million people remain in our country illegally even though they’ve been ordered by a judge to leave.

This rampant abuse of our immigration system is also being driven by the Flores settlement agreement. Under this court precedent, minors who are apprehended crossing our border generally cannot be kept for more than 20 days in detention centers – requiring law enforcement to either separate children from their family members or release the entire family into the United States.

As President Trump made clear, the United States does not have a policy of separating children from their families – but Flores encourages adults to cross the border with a child in the hope of entering and staying in the United States. And it encourages childless adults – including gang members and drug traffickers – to use children to pose as families, in order to enter our country illegally and avoid deportation.

Finally, current law forces our federal law enforcement agencies to treat every unaccompanied minor from a non-neighboring country who crosses our border illegally for any reason as a victim of human trafficking – resulting in thousands from Central America being released into the United States.

Each of these loopholes is contributing to the humanitarian and national security crisis at our southern border – and each of them requires Congress to act. Congress must return our asylum laws to their original purpose of helping victims of government persecution by raising the standard of proof for credible fear. And it must extend the period of time minors can be detained with their families so that they can remain together throughout the adjudication process.

President Trump promised the American people that we would secure our border, and he’s a man of his word. We’ve secured from Congress more than $1.3 billion to build 55 miles of a physical barrier in highly dangerous areas along the southern border, as well as funding for 5,000 more beds in ICE detention facilities and an additional 600 Customs and Border Protection officers. And in February, the president declared a national emergency to secure an additional $8.1 billion to build a wall on the southern border of the United States.

President Trump is doing his job. The men and women of law enforcement are doing their jobs. Now it’s time for Congress to do its job and close the loopholes in our immigration laws that are driving the humanitarian and security crisis on our southern border.