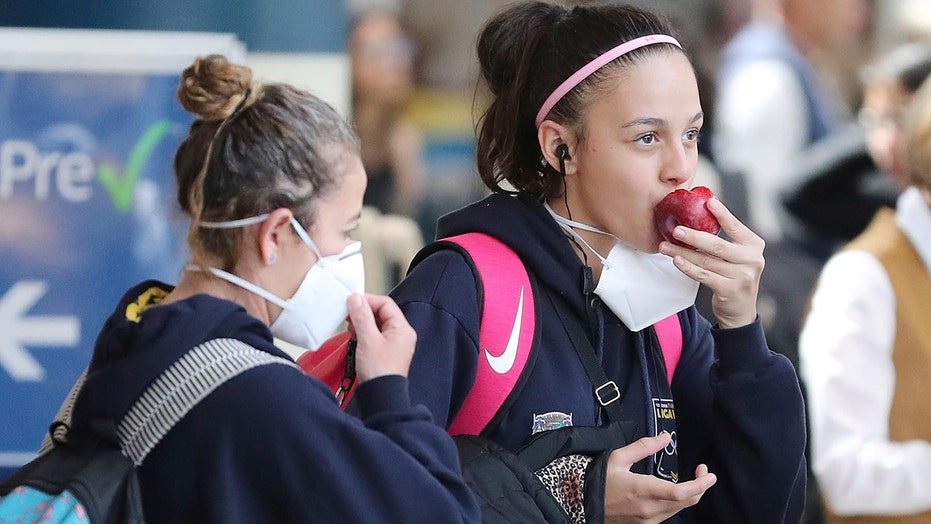 President Trump visited the Centers for Disease Control and Prevention (CDC) headquarters Friday and expressed confidence in the public health response to the new coronavirus while airing a disagreement he has with the vice president on whether to bring the Grand Princess cruise ship passengers onshore in California.

"I have great experts, including the vice president ... they would like to have the people come off," Trump said in arguing he'd prefer to have the passengers stay idling off the coast of California. "I would rather have the people stay. But I'd go with them. I told them to make the final decision."

"I don't need the numbers to double because of one ship," Trump said, noting the U.S. numbers currently of 11 deaths and 240 infected.

"Frankly, if it were up to me, I would be inclined to say leave everybody on the ship for a period of time and use the ship as your base," Trump said.

The Grand Princess lay at anchor near San Francisco after a traveler from a previous voyage died of the disease and others were being tested for the virus. While the more than 3,500 aboard the 951-foot  vessel were ordered to stay at sea, officials scrambled to keep the virus at bay. Pence revealed Friday that 21 people had tested positive.

Meanwhile, Trump expressed confidence in the agency's public health response and his own ability to fend off illness.

After a day of meetings in Washington, Tennessee, and Georgia where he shook plenty of hands, Trump said he has no plans to give up glad-handing or canceling his crowded campaign rallies.

As for the rallies, Trump said he's had no trouble filling arenas despite the public health concerns.

Trump, wearing a red "Keep America Great" campaign hat, got briefed by CDC health officials that up to 4 million tests will be available by the end of next week to test for the new virus. He defended the health officials who took heat for having problems with rolling out tests.

"Anybody who wants a test can get a test," Trump said.

"They have the tests and the tests are beautiful," Trump said, again urging "calm."

Trump then called the tests "perfect" and compared them to his phone call with the president of Ukraine to ask for investigations into the Bidens that got him impeached by Democrats. Trump repeatedly defended the July 25 transcript as "perfect."

"This was not as perfect as that [call], but pretty good," Trump told reporters inside a lab.

Trump arrived at the CDC at 4:25 p.m. to meet with the doctors and scientists on the frontlines of the outbreak, after the White House temporarily scrapped the trip over concerns a CDC employee had contracted the COVID-19 virus.

The White House had canceled the trip to Atlanta earlier "out of an abundance of caution" because a CDC staff member was suspected to have contracted the coronavirus and officials did not think the test results would be returned in time before the president's trip Friday, press secretary Stephanie Grisham told reporters Friday aboard Air Force One.

"We were informed that there may have been a person with the virus and they now find out that that was a negative test," Trump said earlier, telegraphing the Secret Service was working to resume the trip. "They've tested the person very fully and it was a negative test."

The on-again, off-again nature of the trip epitomized the heightened precautions Americans are taking -- from companies and schools to lawmakers and the White House -- on how best to safeguard against the spreading virus.

The White House initially gave a different reason for the CDC trip being erased from his schedule, saying Trump didn't want to "interfere" with the important work at the epicenter of the U.S. response.

"The president is no longer traveling to Atlanta today," a White House official said Friday morning. "The CDC has been proactive and prepared since the very beginning and the president does not want to interfere with the CDC’s mission to protect the health and welfare of their people and the agency."

But later Friday, at the signing of a $8.3 billion coronavirus spending bill, Trump said the reason the trip had been in jeopardy was because of the suspected new case at the center, but a test cleared the staffer.

"They had one person who was potentially infected," Trump said.

Money is on the way to combat the new virus. The bipartisan $8.3 billion spending bill passed the House and Senate with near-unanimous support to tackle the coronavirus outbreak that has killed nearly 3,400 people worldwide, mostly in China.

“We’re doing well, but it’s an unforeseen problem,” the president said of the U.S. response in the White House's Diplomatic Reception Room.

The spending measure will fund the development of vaccines, medications to treat the disease and diagnostic tests all while helping state and local governments -- and foreign governments -- fight the coronavirus, which causes a disease officially known as COVID-19.

Trump's visit to Georgia brought the commander-in-chief up close and personal with dicey GOP senate primary politics. Newly-appointed Georgia Sen. Kelly Loeffler flew with Trump aboard Air Force One, in a boost for her campaign.

But on the tarmac, Trump was greeted by Rep. Doug Collins, R-Ga., who is running for the Senate seat against Loeffler. Collins was with Gov. Brian Kemp, who appointed Loeffler to the seat, despite Trump's preference for Collins, who had been a fierce defender of the president during impeachment.

Loeffler, a financial executive who co-owns the WNBA's Atlanta Dream, deplaned with Trump and very quickly shook Collins' hand in a seemingly awkward exchange, according to pool reports.

Trump first visited tornado-ravaged parts of Tennessee after the storms left 24 dead and many more injured. From Georgia, Trump headed to Mar-a-Lago for the weekend for GOP fundraising events.