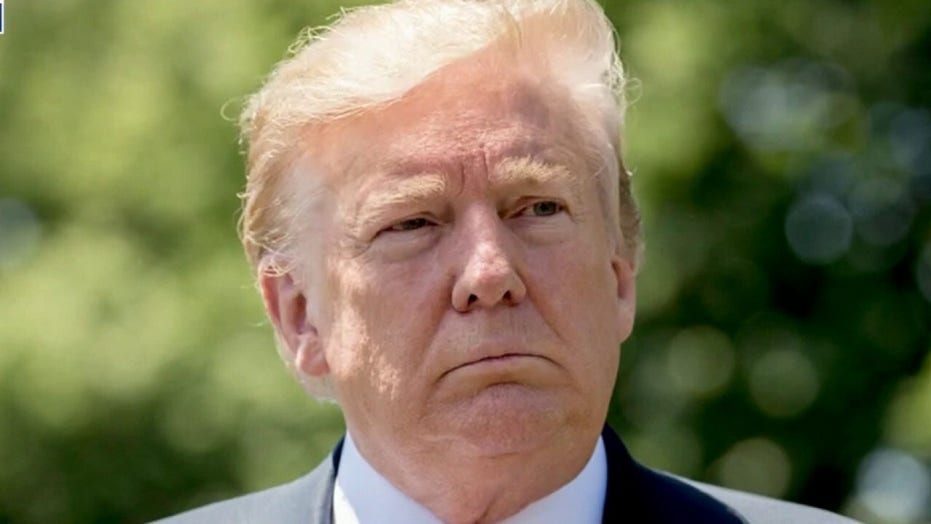 Delay the election? Stirewalt explains why Trump made a 'tactical error'

President Trump on Thursday floated the possibility of delaying November’s general election, in a fiery new warning about the implications of mail-in ballots.

The president’s tweet comes 96 days before the Nov. 3 election, and with early voting in some states starting in just two months. It also comes as the coronavirus pandemic continues unabated, with new cases of the virus spiking in many states. Trump’s suggestion coincided too with the federal government reporting on Thursday the worst economic contraction in the nation’s history, as the pandemic has flattened much of the economy and attempted moves by states to revive their economies have been hampered by a surge in new coronavirus cases.

“With Universal Mail-In Voting (not Absentee Voting, which is good), 2020 will be the most INACCURATE & FRAUDULENT Election in history. It will be a great embarrassment to the USA. Delay the Election until people can properly, securely and safely vote???” the president tweeted.

But Trump has no authority to delay a general election. The Constitution gives Congress the power to set the date for elections.

Democratic challenger Joe Biden has repeatedly warned that the president may try to delay the general election.

"Mark my words, I think he is going to try to kick back the election somehow, come up with some rationale why it can't be held,” the former vice president said in April.

The most recent public opinion polling in the Biden-Trump race shows the presumptive Democratic nominee leading in national surveys as well as in most of the crucial general election battleground states.

A senior administration official told Fox News that "the President is simply raising a question, whereas Democrats are proposing an entirely new system (of massive mail in voting) that will result in enormous delays in the election results.”

And Trump re-election campaign national press secretary Hogan Gidley – responding to the president’s tweet – said in a statement that “the President is just raising a question about the chaos Democrats have created with their insistence on all mail-in voting."

But the Democratic National Committee – responding to the president’s tweet – charged that “Trump’s threat is nothing more than a desperate attempt to distract from today’s devastating economic numbers that make it clear his failed response to the coronavirus has tanked the U.S. economy and caused tens of millions of Americans to lose their jobs.”

“Trump can tweet all he wants, but the reality is that he can’t delay the election, and come November, voters will hold him accountable for his failures that have led to catastrophic consequences for the American people,’ added DNC War Room senior spokesperson Lily Adams.

Sen. Bernie Sanders of Vermont – who was Biden’s last remaining rival in the Democratic nomination race before dropping out and backing Biden – was more blunt.

“No, Mr. President. We're not delaying the election. The American people are sick and tired of your authoritarianism, your lies, your racism. On November 3, 2020 democracy will prevail and your disastrous presidency will end. Bye-bye,” the progressive leader tweeted.

Senate Majority Leader Mitch McConnell said in a local TV interview in his home state of Kentucky that the 2020 election date "is set in stone."

And House Republican Leader Rep. Kevin McCarthy of California stressed that “never in the history of the federal elections have we ever not held an election and we should go forward with our election.”

Former Rep. Zach Wamp, a conservative from Tennessee who’s working with the election advocacy group Issue One to push for Congress to approve more election security funding, told Fox News that the president’s tweet is “going over like a lead balloon among Republicans and Democrats.”

The president the past few months repeatedly railed against the dramatic increase in balloting by mail during the primaries amid serious health concerns over in-person voting amid the coronavirus.

"Mail-in voting is horrible. It's corrupt," the president argued during a White House press briefing in early April. Trump suggested that “you get thousands and thousands of people sitting in someone's living room signing ballots all over the place…I think that mail-in voting is a terrible thing.”

Last month, he claimed in a tweet that “Because of MAIL-IN BALLOTS, 2020 will be the most RIGGED Election in our nations history.”

And last weekend he charged on Twitter that “The 2020 Election will be totally rigged if Mail-In Voting is allowed to take place, & everyone knows it.”

Attorney General William Barr appeared to disagree with the president over whether the general election will be rigged.

Responding to a line of questioning from Democratic Rep. Cedric Richmond of Louisiana on Tuesday as he testified in front of the House Judiciary Committee, Barr contradicted the president by saying “I have no reason to think” the 2020 election will be “rigged.”

But Barr, in his testimony, agreed with Trump as he argued that “wholesale” mail-in voting “substantially increases the risk of fraud.”

Five states currently vote entirely by mail: Washington State, Oregon, Colorado, Utah and Hawaii. But amid the coronavirus, many states with both Democratic and Republican governors have moved to make it easier for voters to send in ballots by mail. Last month Democratic Gov. Gavin Newsom of California signed into law a measure that requires his state to send every registered voter a ballot.

For months, the president has railed against efforts by Democrats and some Republicans to allow more people to vote by mail in the general election due to coronavirus health concerns. His reelection campaign and the Republican National Committee earlier this year launched a multimillion-dollar legal push to squash moves by Democrats to expand ballot access.

Gidley charged that the Democrats "are using coronavirus as their means to try to institute universal mail-in voting, which means sending every registered voter a ballot whether they asked for one or not. Voter rolls are notoriously full of bad addresses for people who have moved, are non-citizens, or are even deceased. Universal mail-in voting invites chaos and severe delays in results, as proven by the New York Congressional primary where we still don’t know who won after more than a month.”