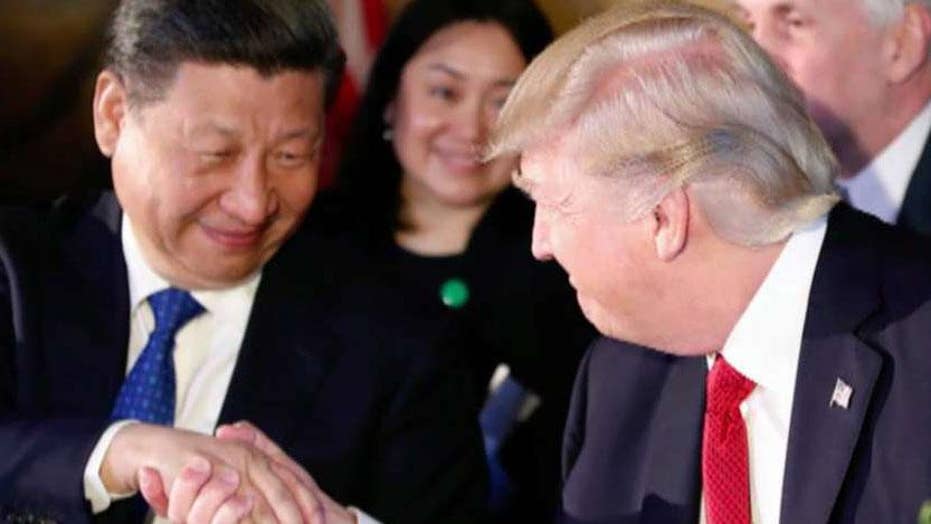 President of Walser Wealth Management Rebecca Walser says that we absolutely must get a good trade deal with China.

President Trump shared his take on the stalled U.S. trade talks with China on Saturday, suggesting Beijing may be waiting until the 2020 presidential election to see if a Democrat gets elected to secure more favorable terms.

“I think that China felt they were being beaten so badly in the recent negotiation that they may as well wait around for the next election, 2020, to see if they could get lucky & have a Democrat win - in which case they would continue to rip-off the USA for $500 Billion a year...." the president wrote.

Trump’s remarks came a day after another round of talks between Washington and Beijing ended with no trade pact. In follow-up tweets, the president said it would be wise for China to agree to a trade deal soon, before predicting it would face “far worse” terms if the impasse continues.

"....The only problem is that they know I am going to win (best economy & employment numbers in U.S. history, & much more), and the deal will become far worse for them if it has to be negotiated in my second term. Would be wise for them to act now, but love collecting BIG TARIFFS!" he posted.

VARNEY: CHINA TRADE TALKS, TARIFFS 'THE MOST IMPORTANT FINANCIAL STORY OF THE YEAR'

In response to a lack of progress between both sides last week, the U.S. imposed further tariffs on $200 billion in Chinese goods and threatened more tariffs on remaining Chinese products worth $325 billion.

China’s top negotiator, Vice Premier Liu He, said Friday that both sides have agreed to more trade talks in Beijing, Bloomberg reported. Speaking to Chinese media, he said the U.S. must remove all extra tariffs to clear the way for the possibility of an agreement. China has vowed retaliation but has not released specifics.

“For the interest of the people of China, the people of U.S. and the people of the whole world, we will deal with this rationally,” Liu said. “But China is not afraid, nor are the Chinese people,” adding that “China needs a cooperative agreement with equality and dignity.”

U.S. Trade Representative Robert Lighthizer said the Trump administration would release details of the tariffs on $325 billion in Chinese imports on Monday.

A trade deal seemed imminent, until last week when China sent American trade negotiators a cable with redacted text that both sides had been working on. To the American, the modification signaled Beijing’s walking back of its earlier commitments made during months of negotiations.

In this March 5, 2019 photo, a cargo ship arrives at the Port of Tacoma, in Tacoma, Wash. U.S. and Chinese negotiators resumed trade talks Friday, May 10, 2019, under increasing pressure after President Donald Trump raised tariffs on $200 billion in Chinese goods and Beijing promised to retaliate. (Associated Press)

The divide between both sides has not stalled the U.S. economy. The GDP rose at a 3.2 percent annualized rate, even as a five-week partial government shutdown affected some sectors. Unemployment is at a historic low and 213,000 jobs are being created monthly.

Trump, who is seeking re-election on the heels of a booming economy, signaled Friday that he is no rush to secure a deal. Over Twitter, he proposed using income from the import taxes to buy agricultural products from American farmers.

Chinese state media said China would give in on its core interests, Reuters reported.

“China clearly requires that the trade procurement figures should be realistic; the text must be balanced and expressed in terms that are acceptable to the Chinese people and do not undermine the sovereignty and dignity of the country,” the People’s Daily newspaper said in a commentary on Saturday.