There is a stark difference between the American media's negative coverage of Trump's U.K. visit and the positive coverage across the pond.

President Trump on Tuesday said Prime Minister Theresa May was “foolish” in her handling of Brexit, as he doubled down on the feud with Britain’s ambassador to the U.S. Kim Darroch -- whom he called “wacky,” “stupid” and a “pompous fool.”

“The wacky Ambassador that the U.K. foisted upon the United States is not someone we are thrilled with, a very stupid guy. He should speak to his country, and Prime Minister May, about their failed Brexit negotiation, and not be upset with my criticism of how badly it was handled,” he tweeted.

He then turned his ire toward May, who is leaving office later this month after resigning over her handling of Britain’s departure from the E.U. Britain was scheduled to leave the bloc in March, but that timeline has been pushed back until October amid repeated failures to get her withdrawal agreement, negotiated with European leaders, through Parliament.

“I told @theresa_may how to do that deal, but she went her own foolish way-was unable to get it done. A disaster!” Trump said, apparently referring to past advice that she sue the E.U. "I don’t know the Ambassador but have been told he is a pompous fool.”

The outburst came amid an escalating diplomatic spat over the leak of diplomatic cables in which Darroch called Trump’s administration “diplomatically clumsy and inept” and said he doubted it would become “substantially more normal.”

Responding on Twitter, Hunt said: "@realDonaldTrump friends speak frankly so I will: these comments are disrespectful and wrong to our Prime Minister and my country.

"Your diplomats give their private opinions to @SecPompeo and so do ours! You said the UK/US alliance was the greatest in history and I agree...

"But allies need to treat each other with respect as @theresa_may has always done with you. Ambassadors are appointed by the UK government and if I become PM our Ambassador stays."

The memo was one of several cables published by the U.K.'s Mail on Sunday in which Darroch made negative statements about the U.S. government, in which he said that Trump could be at the mercy of "dodgy Russians," and that Trump's presidency could "crash and burn" and be at "the beginning of a downward spiral." He also reportedly indicated that Trump could win re-election, warning that he could shrug off scandals and "emerge from the flames, battered but intact, like [Arnold] Schwarzenegger in the final scenes of 'The Terminator.'"

Trump on Sunday called Darroch ineffective and said “he has not served the U.K. well.” He followed up on Monday to attack both Darroch and May – announcing that he won’t work with the ambassador anymore.

“I have been very critical about the way the U.K. and Prime Minister Theresa May handled Brexit. What a mess she and her representatives have created. I told her how it should be done, but she decided to go another way,” he wrote in a tweet.

“I do not know the Ambassador, but he is not liked or well.... thought of within the U.S. We will no longer deal with him,” he added.

But Downing Street stood by its man in Washington, saying early Tuesday that Darroch “continues to have the prime minister's full support.” 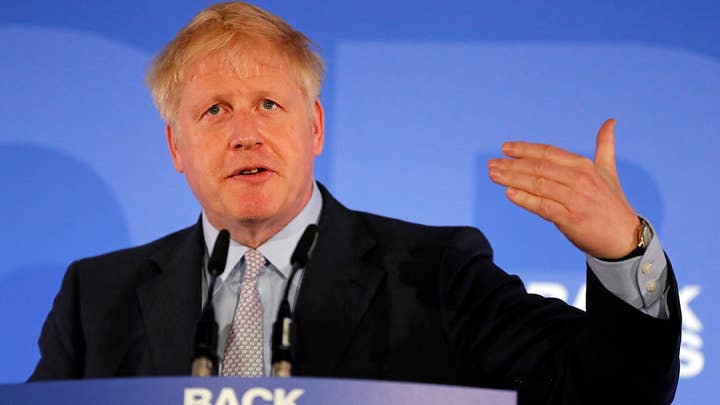 A spokesman said that “We have made clear to the U.S. how unfortunate this leak is” and that “the selective extracts leaked do not reflect the closeness of, and the esteem in which we hold, the relationship.”

“At the same time we have also underlined the importance of ambassadors being able to provide honest, unvarnished assessments of the politics in their country,” the spokesman added.

May will be replaced at the end of the month by either former Foreign Secretary Boris Johnson or current Secretary Jeremy Hunt after a Conservative Party ballot to decide the party leadership. Trump has spoken positively of both candidates, particularly Johnson who he has said would be “excellent” as Britain’s next prime minister.