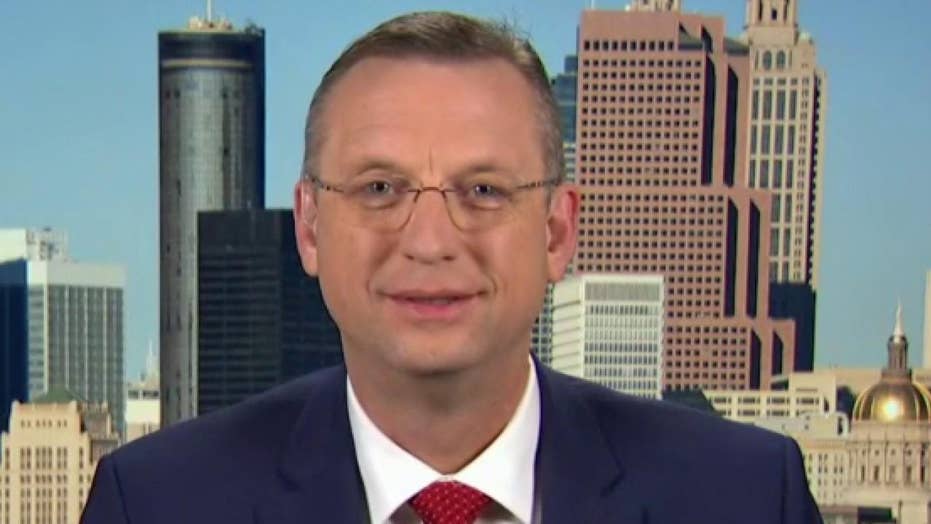 President Trump said late Thursday that he is considering Rep. Doug Collins, R-Ga., for the permanent Director of National Intelligence job, a move that could resolve a mini-crisis in the GOP surrounding Collins' challenge against incumbent Sen. Kelly Loeffler, R-Ga., in Georgia's upcoming special election.

Yet Collins told Fox Business Network's Maria Bartiromo on Friday morning that while he's humbled by the possible offer, he is focused on running for Senate and would not accept the job.

"This is not a job that interests me, at this time it's not one that I would accept because I'm running a Senate race down here in Georgia," Collins said.

It's unclear whether that could change at some point.

Trump's comment that he may nominate Collins to lead the nation's intelligence agencies adds an element of intrigue to the U.S. Senate special election in the Peach State, after Collins' decision to join the race upset many in the GOP. Trump's statement came the day after he appointed U.S. Ambassador to Germany Richard Grenell to the DNI post in an acting role. Before Grenell, Joseph Maguire held the acting DNI job, which he assumed in August after the last Senate-confirmed DNI, Dan Coats, left the administration.

In a Thursday night tweet, Trump said he would send a nominee for DNI to the Senate soon.

AMBASSADOR RICHARD GRENELL TO BE NAMED DIRECTOR OF NATIONAL INTELLIGENCE

"Thank you to our great US Ambassador to Germany, @RichardGrenell, for stepping in to serve as acting DNI," Trump said. "I will be nominating a terrific candidate for the job very soon. Stay tuned!"

Collins, a staunch Trump ally and one of his most vocal defenders through the impeachment saga, confirmed to "Fox & Friends" on Jan. 29 that he would seek higher office. The move drew a strong rebuke from the organization tasked with defending the Republican Senate majority.

"This shortsighted decision is stunning," National Republican Senatorial Committee Executive Director Kevin McLaughlin said in a statement at the time. "Doug Collins' selfishness will hurt David Perdue, Kelly Loeffler, and President Trump. Not to mention the people of Georgia who will stand to bear the burden of it for years to come. All he has done is put two senate seats, multiple house seats, and Georgia's 16 electoral votes in play."

Georgia's special election rules pit all candidates, regardless of party, against each other on the ballot in November. There will be a runoff in January if no candidate secures a majority of votes.

That means Collins isn't simply running a primary challenge against an incumbent. He would split GOP votes with another popular Republican in his state as Democrats are running in the same race, making a runoff likely and potentially putting a Republican Senate majority on the line.

If Trump were to nominate Collins, the ranking member on the House Judiciary Committee, he would presumably end his Senate run to focus on his new post, solving that problem for Republicans.

Trump's statement does not mean that he couldn't also consider Grenell or other candidates for the job. Additionally, it remains to be seen how Senate Republicans would react to a potential Collins nomination since the representative's main national security and intelligence experience was a short stint on the House Foreign Affairs Committee during his first term in 2012 and 2013.