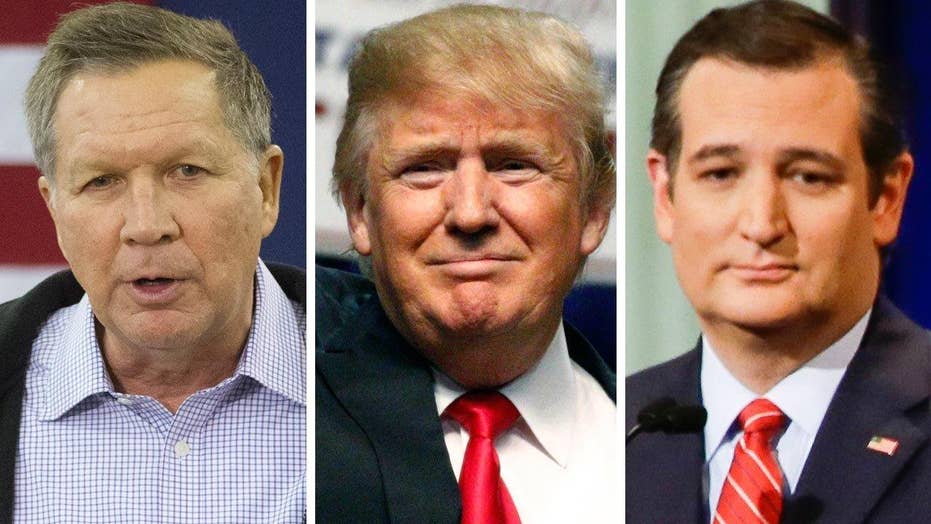 Republican civil war - and the seeds of a contested convention planted - as Donald Trump, Ted Cruz and John Kasich back out of promise to suppert GOP, no matter who it is

Donald Trump said Tuesday that he would no longer honor his pledge to support the eventual Republican nominee for president, while fellow candidates Ted Cruz and John Kasich refused to say whether they would back the party's pick.

All three GOP contenders appeared at a CNN town hall in Milwaukee one week before Wisconsin's April 5 primary.

When asked if he would keep the pledge he signed last September, Trump responded "No, I won’t." The real estate mogul explained that he was taking back the pledge because, "I have been treated very unfairly," and listed the Republican National Committee and party establishment among those he believes have wronged him.

Cruz, who is running second to Trump in the delegate race, shrugged off the question of whether he would support Trump in November, saying "Donald is not going to be the GOP nominee. We're going to beat him." The Texas senator added that nominating Trump "would be an absolute train wreck" and "would hand the general election to Hillary Clinton."

Trump, who followed Cruz on the town hall stage, said he didn't need a promise of support from Cruz.

"He doesn’t have to support me," he said.

Ohio Gov. Kasich, who has vowed to keep his campaign going until this summer's convention in Cleveland despite being a distant third in the delegate count, also didn't say whether he'd stand by the pledge.

Trump has 736 delegates and is the only candidate with a realistic path to clinching the nomination by the end of the primaries on June 7. However, a Cruz win in Wisconsin would narrow Trump's already tight path to the nomination and raise the prospect of a contested convention in Cleveland.

Trump told supporters at a rally that "if we win Wisconsin, it's pretty much over," noting his significant delegate lead over both Cruz and Kasich. Trump held the rally in Janesville, Wis., hometown of House Speaker Paul Ryan — who last week called for more civility in politics even as the Republican presidential race grew more personal and nasty.