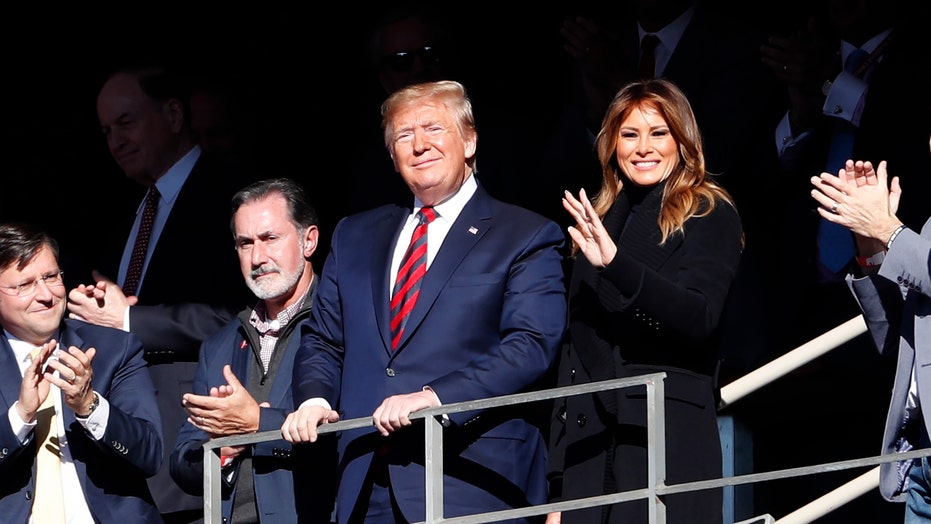 President Trump attended his third major sporting event in 13 days Saturday, traveling to Tuscaloosa, Ala. to take in the much-anticipated SEC matchup between the hometown Crimson Tide and the LSU Tigers.

Trump and first lady Melania Trump, sitting in a box one tier above the field, were introduced to the capacity crowd at Bryant-Denny Stadium just before the game began. The couple received sizable cheers, with a few boos mixed in. The crowd started chanting “USA, USA” shortly after they were introduced.

Trump, who won Alabama with 63 percent of the vote in the 2016 presidential election, smiled, gave a thumbs-up a few times and threw a couple of fist bumps into the air as the Alabama fans waved red and white pompoms in response. Melania Trump got an equally enthusiastic welcome.

Joining the Trumps in the box were Sen. Richard Shelby, R-Ala., and members of Congress from both states. The group included Rep. Bradley Byrne, R-Ala., who is running for Senate against a field of primary opponents that includes former Attorney General Jeff Sessions.

The president's motorcade pulled away from the stadium early in the fourth quarter. LSU defeated Alabama, 46-41.

There was little sign of political sentiment on campus but plenty of bipartisan grumbling about the long lines to get in due to enhanced security.

The inflatable figure depicting a baby Donald Trump wearing a diaper, which has been seen at protests around the world, made an appearance in Tuscaloosa. A protester carried a sign that said "Roll Tide Impeach 45" and a woman held a signing saying she had sold her ticket and donated the money to the Alabama Democratic Party.

But there were more pro-Trump signs. One woman wore an oversized red MAGA hat and carried a sign saying: "Make BAMA #1 Again." There were flags emblazoned with "Trump 2020" and banners that read: "Keep America Great Trump 2020."

A crowd of more than 100,000 crimson-clad fans cheered long before kickoff as the P.A. announcer hyped the “game of the century” and praised  American service members ahead of Monday's Veteran's Day holiday.

Trump refrained from choosing a side in the Alabama-LSU matchup, the first regular-season game between the AP poll's top two teams since 2011.

U. OF ALABAMA STUDENT GOVERNMENT CLARIFIES WARNING ABOUT 'DISRUPTIVE BEHAVIOR' AHEAD OF TRUMP VISIT TO LSU GAME

"I love Alabama," Trump said Friday. "I'm going to go watch a very good football game, which is tomorrow with LSU, and it's going to be great.”

"Regardless of your political views, that's pretty cool, having the president at the game," said LSU quarterback Joe Burrow.

Alabama wide receiver Henry Ruggs III said, "Just for him even wanting to come to this game, it just shows, like I said, the magnitude of the game."

On Oct. 27, Trump attended Game 5 of the World Series between the Washington Nationals and Houston Astros, where he was roundly booed. Some fans at the game chanted “lock him up."

Trump became the first president to decline to throw the ceremonial first pitch at a World Series game, “in order to make the fan experience as positive as possible” according to MLB commissioner Rob Manfred.

Last week, Trump honored the Nationals after ther first-ever World Series championship. Nationals all-star catcher Kurt Suzuki, unlike many of his fans and teammates, took no issue with the president. Suzuki put a red "Make America Great Again" hat on his head as he made his way to the podium.