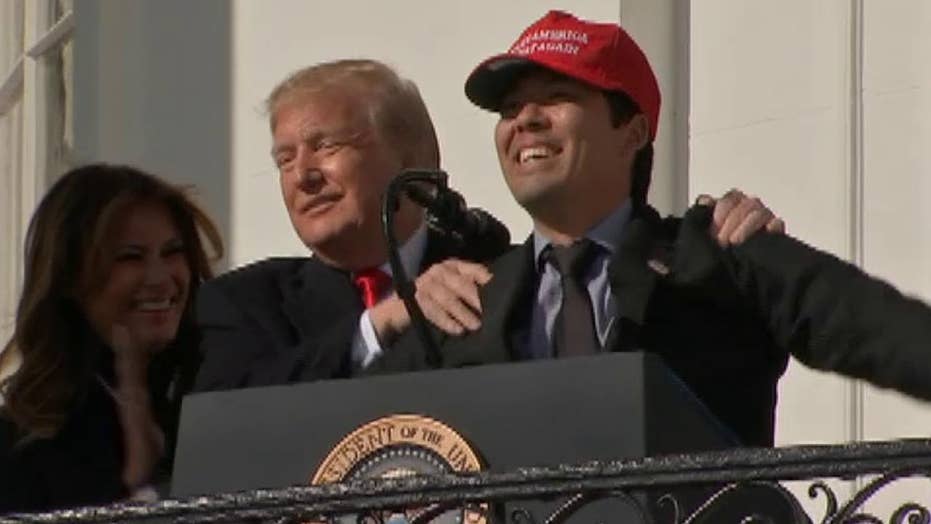 The president Hugs Nationals catcher Kurt Suzuki during an event honoring the World Series Champions at the White House.

Trump might not have been popular at Nationals Park during Game 5 last week, but one of the ball club's World Series winners was more than happy to meet the president on Monday.

Catcher Kurt Suzuki -- who was pivotal in one of the Nationals' most memorable regular-season wins this past September when he blasted a three-run homer to cap a remarkable comeback against the New York Mets -- made his way to the microphone after Trump called on the catcher.

As the Hawaiian-born player stepped to the plate, so to speak, he plucked out a red "Make America Great Again" cap and pulled it on -- much to the president's delight.

"I love him," Trump could be heard saying before he wrapped his arms around Suzuki's chest.

As he walked away from the microphone, Trump said: "What a job he did... I didn’t know that was going to happen."

Suzuki's enthusiastic support for Trump did not mirror the emotions of all his teammates, with seven members of the Nationals' World Series roster not attending the event. Among them: reliever Sean Doolittle, National League MVP candidate and third baseman Anthony Rendon, outfielders Victor Robles and Michael A. Taylor, and pitchers Joe Ross, Javy Guerra and Wander Suero.

During the celebration, Trump applauded the team's first title in franchise history, calling it a "comeback story for the ages" and predicting it will be the first victory of many. He singled out World Series MVP Stephen Strasburg, NLCS MVP Howie Kendrick and others. First baseman Ryan Zimmerman thanked Trump, saying he kept the country safe and made it the greatest on earth; he then presented to the president a No. 45 Nationals jersey.

All in all, the Nationals' visit did not have as much political undertone as when the 2018 champion Boston Red Sox were honored by Trump but without manager Alex Cora, who did not attend that ceremony after citing his frustration with the administration's efforts to help his native Puerto Rico recover from a devastating hurricane.

Washington manager Dave Martinez, whose parents were Puerto Rican, was in attendance and made some brief remarks.

The Nationals' White House visit was the latest stop on their whirlwind victory tour around the nation's capital after coming back from a 3-2 series deficit to beat the Houston Astros in Game 7 last week. The team paraded down Constitution Avenue on Saturday and celebrated at the Washington Capitals hockey game Sunday night.