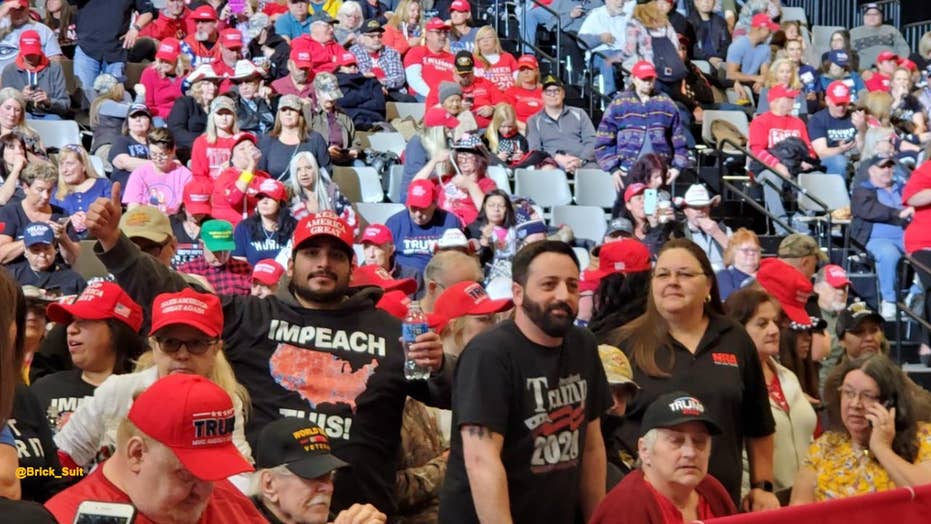 Thousands showed up for President Donald Trump’s rally in Las Vegas on Friday, some standing in line as early as 3 a.m. on Thursday. Fox News spoke with some of the supporters on what the energy is like at the third and final rally of his West Coast tour.

President Trump bashed a reported intelligence assessment that Russian President Vladimir Putin wants him to win reelection in November as "disinformation" being peddled by "crazy" Democrats, as he held his third rally in three days Friday afternoon in Las Vegas.

"Doesn't he want to see who the Democrat is going to be?" Trump said of Putin. "Wouldn’t he rather have Bernie [Sanders] who honeymooned in Moscow?"

Rallying in Nevada the day before Democrats hold their caucuses, Trump dismissed the assessment reportedly delivered from his own intelligence team to members of Congress as another vendetta from House Intelligence Committee Chairman. Adam Schiff, D-Calif., -- who Trump referred to as "pencil neck" -- after their investigations against him over alleged Russia collusion and withholding of aid from Ukraine failed to result in the president's removal from office.

"It's disinformation," Trump said. "It's the only thing they're good at." 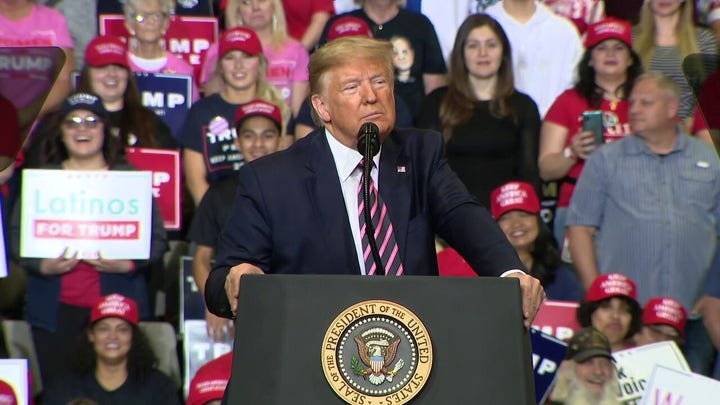 "These people are crazy," Trump said of the Democrats, predicting that the Putin preference narrative will become the focus of a new probe.

After news of the intelligence briefing on Russia meddling to Congress was reported, Trump announced that his acting director of national intelligence, Joseph Maguire, will be replaced by outspoken Trump loyalist, Richard Grenell, the ambassador to Germany.

A day after Trump's longtime ally Roger Stone was sentenced in federal court to 40 months in prison, Trump also lamented the justice system isn't working for everybody.

“We're trying to get fairness for a certain person," Trump said, though not mentioning Stone by name. "He's been treated very unfairly. A man who had a juror who was a radical anti-Trump person.”

The president opened his rally by inviting members of the “Miracle on Ice” U.S. Olympic hockey team on stage to mark the 40th anniversary of their victory over the Soviet Union in 1980.

Trump touted a very unified Republican Party and a booming economy that has benefited all corners of the economy.

The president spent a section of his wide-ranging speech talking about Hispanic-Americans, touting their low unemployment rate under his watch and said they understand the need for border protections better than anyone.

“Who in this audience is Hispanic?” Trump said to cheers. “We’re doing great.”

Trump, looking ahead to the general election, also predicted he'll retake the state he lost in 2016  -- by wide margins.

“With your help this November, we're going to defeat the radical socialist Democrats, and we are going to win Nevada, in a big beautiful landslide," Trump said.

Trump lost Nevada to Hillary Clinton by two percentage points in 2016, but the Trump campaign is working to flip the Silver State in November.

Trump repeatedly mocked Democrats for their botched Iowa caucuses and predicted more technical trouble on Saturday when divided Democrats head to the Nevada caucuses to pick their 2020 nominee.

"They can't count the votes," Trump said of the still contested Iowa caucuses, adding that Nevada Democratic Party caucuses also seem to have "messed up" computers and problems with vote tallying. 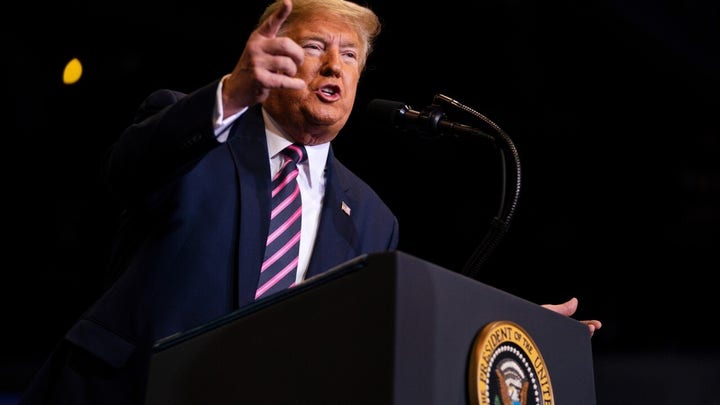 “She’s mean, right? That face," Trump said with a scowl. "She wanted to get him."

Trump, holding his neck, said Bloomberg was "gasping for breath" on the debate stage where he took incoming from all his opponents.

Trump did an imitation of a flustered former Vice President Joe Biden, groaning and shaking his fist.

“Biden is angry," Trump said. "That’s what happens when you can’t get the words out.”

(Biden has been open about suffering from a stutter.)

Trump went after former President Barack Obama for telling the American people if they liked their health insurance they can keep it, and joked that he should also be impeached.

The excitement was building hours before Trump arrived. Fans started lining up for the rare daytime rally as early as 3 a.m. local time Thursday, KVVU reported. By Friday morning, hundreds in red caps and Trump gear were camped out in front of the Las Vegas Convention center with tents and sleeping bags hoping to get a good spot to see the president.

Trump has used his Vegas hotel as a base during his West Coast fundraising and campaigning swing. He kicked off his trio of rallies in three days in Phoenix on Wednesday before delivering a fiery performance Thursday in Colorado Springs.

One fan traveled from the Arizona rally straight to Las Vegas to get one of the first spots in line to see Trump again.

"I went to the Phoenix rally last night and when it was over I was so, I had so much energy I was like, I can make it to Vegas tonight," Blake Marnell told Fox 5 outside the convention center.

The Las Vegas rally gives Trump counter-programming in Nevada as Democrats have been crisscrossing the state this week in a final push for votes before Saturday's caucuses.

Democratic leaders have expressed optimism that the Nevada caucuses, which are run by the state party, will go much smoother than in Iowa. Technical and reporting problems in Iowa meant votes couldn't be tallied on caucus night and results are still being contested. Buttigieg currently has a narrow state delegate equivalent lead over Sanders, I-Vt., but both camps are seeking targeted recounts.

Sanders went on to a narrow victory against Buttigieg in New Hampshire and polling in Nevada suggests he's poised to be a clear winner there on Saturday.

Nevada Democrats scrapped plans to use a smartphone app and planned instead to use iPads to submit results through a Google web form. However, on the eve of the caucuses on Friday, Nevada Democrats said caucus organizers will forgo the Google form altogether and precinct results will be called in using a traditional telephone hotline.

Republicans in Nevada aren't even holding caucuses, in a sign of support for Trump.

Trump relished trolling his Democratic opponents this week and said he doesn't care who is the nominee because he'll defeat them all.

Like his wild rally in Colorado Springs, Colo., on Thursday, Trump took another shot at the movie "Parasite" saying the South Korean film shouldn't have gotten the Oscar for best picture earlier this month, arguing it should have been relegated to the foreign film category. He also took another shot at Hollywood actor Brad Pitt, calling him a "stiff."

In a more tender moment of the rally, Trump marveled at his 13-year-old son, Barron, who he called a "genius" with computers.

"Wow," Trump said of the affection for his youngest son. "He’s going to like that. He’s a good boy. He’s a tall boy. I’ll tell you that."